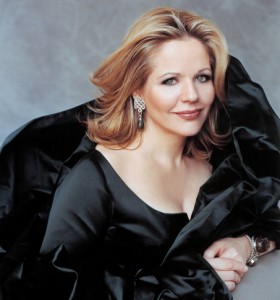 Having spent most of September triumphantly touring Europe with Bernard Haitink, the Chicago Symphony Orchestra returns home to start the new season a bit late but with a program well worth the wait.  Soprano superstar Renée Fleming, whose appearances at Lyric Opera have steadily dwindled as her international popularity has increased, makes her only area appearance this season in a program that includes her traversing Samuel Barber’s “Knoxville: Summer of 1915,” an evocative and nostalgic vocal tone poem that manages to catch the lazy mood of a summer evening in the deep South nearly a century ago.  Fleming is one of our best interpreters of the sumptuous music of Richard Strauss, which has been AWOL at Lyric Opera now for two seasons in a row.  She will sing four of his orchestral songs—“Freundliche Vision,” “Zueignung,”  “Winterweihe” and “Verführung” as only Fleming can, and given the sense of occasion and the usually frantic response of the crowd, expect encores, perhaps even an operatic morsel or two to tide us over until Lyric is able to engage her again.  Also on the program is Strauss’ orchestral tone poem, “Till Eulenspiegel,” a CSO staple, and Leonard Bernstein’s Divertimento for Orchestra.  Bernstein also figures heavily in a one-night-only pre-opening-night concert that includes his colorful “Candide” Overture and his “Serenade” for violin and orchestra based on Plato’s “Symposium” that will feature the CSO debut of Israeli violinist Vadim Gluzman.  Bartók’s “Concerto for Orchestra,” a spectacular CSO signature piece, will close out that concert; both will be conducted by Paavo Järvi.  (Dennis Polkow)