by Dennis Polkow
October 6, 2009Filed under: 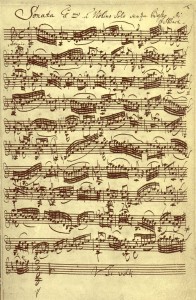 The Bach sonatas and partitas for solo violin are to the violinist what the greatest Shakespeare plays are to the actor: the highest summit of the art form.  But in Shakespeare’s case, there is plenty of support from other cast members; the violinist in this case is all alone with no support or accompaniment whatsoever.  The art of these polyphonic pieces is the ability to be able to convincingly perform simultaneous melodies via double-stops in a manner that really sounds as if you are hearing independent “voices” despite their being performed by one set of hands.  (Imagine a solo show where a single artist has to be different characters at the same time having conversations, and you get the idea.) It is bold for a violinist to program even one of these extraordinary pieces on a recital since the artist is left so exposed and vulnerable. To program all six of these pieces in a single recital is beyond bold, perhaps even reckless. But when the violinist is German performer Christian Tetzlaff, bets are good that this should be a rare, once-in-a-lifetime opportunity to experience these works live in the hands of a consummate artist. Note the special start time of 2 p.m. and that there will be an hour dinner break between the two segments of this Bach-a-thon.  (Dennis Polkow)