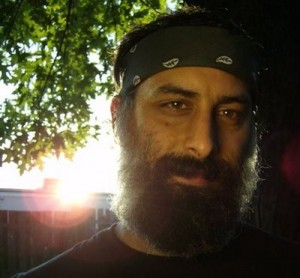 Musicians are just like any other artists, whether visual or literary—new ideas flow through their veins at all times. Limiting the artist to one project can become stagnant. Since there’s no monogamy in music, spreading the creative energy to multiple endeavors breaks up the monotony. So don’t call this a side project. Christopher Crisci and the rest of Old Canes put blood, sweat and what sounds like some tears into the band’s latest effort, “Feral Harmonic,” due out October 20 on Saddle Creek Records. What originally stemmed from short acoustic sets in 2002 while on tour in Europe with Crisci’s Lawrence, Kansas-based band, Appleseed Cast, the project became something all its own. After a dilemma with a German promoter setting up an in-store that the band clearly would have difficulties accomplishing, Crisci stepped in bearing only an acoustic in hand and reached down to strum melodies never heard before.

“They were just songs I enjoyed playing and singing. They didn’t fit what we were doing in Appleseed, but I wasn’t thinking about a different band when I was writing them,” Crisci says when asked how his latest project was birthed. The folky blues sound collides with a punk-rock aesthetic that makes Old Canes a genre-intertwining entity.

Even if Old Canes seems like a mature and self-reflective step for Crisci, who grew up playing intense guitar-based emotional rock influenced by classics of the genre like Mineral and Sunny Day Real Estate, to the layered and epic wall of “post rock” on later Appleseed Cast releases, the band still creates a feel that most acoustic acts fail to duplicate. The twangy hand-clapping sound makes it apparent that Old Canes isn’t the usual lo-fi unplugged band you see covering Bob Dylan songs at the local dive bar, though there is a magical emotion reminiscent of Dylan that gives the listener a warm feeling. The transition feels natural and while the album has a whispery set of songs sprinkled throughout, the second track, “Little Bird Courage,” has the unconventional pop vigor of the likes of Neutral Milk Hotel or early Decemberists. The raspy-throated vocals are genuine and unpolished with no cheap frills and only the music to back it up. It’s almost a throwback to the “Omaha Revolution” that brought a revival to the folk scene in the nineties. “There’s tons of energy live,” Crisci says. “We’re a little louder than one might expect, since we run everything through amps, and the song tempos are pretty fast. It’s not uncommon for dancing to break out… there’s a lot of stomp-chick-stomp-chick beats and sing-along melodies. It’s fun.”

Aside from the new album being released this month, the group had a song off the band’s first release featured on the increasingly popular FX series “Sons of Anarchy”—Crisci was actually offered an acting roll in the episode, he says. “Second Nature, the label that put out that album, notified me that ‘Sons of Anarchy’ was interested in giving me a walk-on speaking part, but I told them I wasn’t interested. I’m waiting for a really good script to come my way…but, they could use one of my songs if they wanted to. So that’s how that happened. I get an acting offer just about every week. OK, I’m lying. It’s just that the real story is so boring. Second Nature told me they wanted to use the song, and I said OK.”

Much like “Early Morning Hymns,” the songs were recorded in Crisci’s basement studio where he tracked most of the instruments himself with help from a cast of pals that filter in and out both live and on the album. When asked if the recording process changed from album to album, Crisci says, “I wanted to incorporate some distortion Casio sounds on this one, but really that only managed to get on the first track. Other than that the process was really the same as ‘Early Morning Hymns.’ Layering instruments on top of a guitar and vocal line.”

With remnants of folk, bluegrass and punk attitude, Old Canes is giving a new meaning to the watered-down and overplayed moniker of “indie rock,” bringing the next generation of stripped-down and electrified acoustic music that’s sure to reignite the fire.