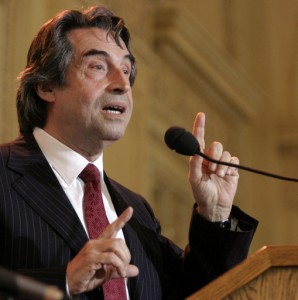 When the announcement was made in May of 2008 that Riccardo Muti had been made music director of the Chicago Symphony Orchestra after a four-year search, I was quick to note in a Newcity cover story on the process and a “Chicago Tonight” appearance that the Austro-Germanic repertoire of Wagner, Bruckner, Mahler and Richard Strauss, i.e. the CSO’s bread-and-butter repertoire, was not particularly associated with Muti. “Anyone who knows me knows that I conduct music from the Baroque to modern, only the blind or deaf wouldn’t know this,” countered Muti a month later at his first area press conference. Not helping matters was that his only scheduled concerts for the following season—last year’s memorable performances of Verdi’s Requiem”—played to his best-known strength: Italian vocal music. Quite cleverly, Muti is addressing the repertoire issue head-on a year before his official tenure begins by offering two weeks of programs that are all Austro-Germanic: Mozart and Bruckner this week, and Brahms next. By performing a well-known Mozart symphony (No. 35, the “Haffner”) alongside an obscure early Bruckner symphony (No. 2), we should learn a lot about what to expect in the Muti era. The choice of the rarely performed Bruckner Second Symphony is a win-win for Muti, since the work has not been heard here in nearly two decades. Unlike the later symphonies that are performed here almost constantly, since comparisons to other performances for better or worse cannot be easily made (though a handful of us can vividly remember Barenboim performing and recording the piece back in the early 1980s and Solti doing so a decade later), Muti will be congratulated for his adventurous programming by performing a rarely heard masterpiece, even if the performance is not a particularly inspired one. Note that the free 3pm Saturday matinee performance is of the Bruckner alone and is part of a day-long series of free performances and will be followed by what is being called a 4:30pm “Town Meeting,” i.e., the public’s first opportunity to hear Muti speak on his plans for the Orchestra and the opportunity to ask him questions for yourself.  (Dennis Polkow)