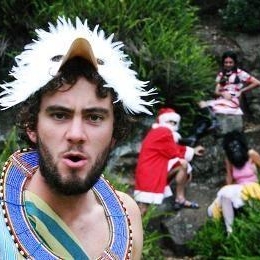 The idea of the Beatles’ “Magical Mystery Tour” charabanc bus traveling through the world’s strange and beautiful lands and meeting wildly idiosyncratic characters (not to mention John and George as the tour guides) was always an appealing concept to me. Unfortunately, I’m not sure what that “Magical Mystery Tour” movie was even about (Ringo’s aunt?), but it sure as hell wasn’t magical. Maybe that’s why I liked “Sea Lion,” the 2008 sophomore record from New Zealand’s The Ruby Suns, an album that at least halfway embodied the spirit of curiosity for some of the world’s quirky places and cultures. Persistent usage of distortion effects, a rickety acoustic guitar and other weird auxiliary percussion plant “Sea Lion” firmly in psych-pop territory, but along the way Ryan McPhun pens sonic odes to the places he’s visited: the Kenyan plains, the monasteries of Thailand, the mountains of New Zealand. Like many of its tribalism-influenced brethrens, The Ruby Suns can delve into sessions of boring self-indulgence, mostly involving one too many repetitions of the same melody, but those moments are too infrequent to completely dismiss the giddy joy from rest of the album. Roll up! (Andy Seifert)