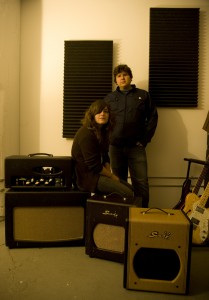 When Karl Briedrick was looking for a singer for his then instrumental band in 2005, in Brooklyn, he sent a message to Marie-Claire Balabanian, through Facebook, not knowing if she was a singer or not. She didn’t know if she was a singer either, but she agreed and Speck Mountain was formed. “I was just looking for people who looked vaguely cool or something and Marie-Claire ran a Krautrock fan club and I thought that was really cool,” says Briedrick. “It turned out that she was an amazing singer.”

Briedrick, a native of Detroit, and Balabanian, who is originally from Los Angeles, wrote and recorded their first record, “Summer Above,” in Brooklyn, but soon realized they needed a cheaper place to live. “It was a matter of money and convenience too. When you live in New York, you can’t have a car, and the practice space—you’re sharing it with five people,” says Briedrick. So, they chose Chicago for its central location, its cost of living and its music scene and then they relocated. “People [in Chicago] are really supportive and nice and it just made sense for us.”

Four years later, things seem to be going well for Speck Mountain since the move. “We have a really supportive fan base and people show up to our shows,” says Briedrick. “We love the venues here a lot more than other places. Schubas and the Hideout, they are probably our two favorite places to play in the United States.”

Speck Mountain’s music is soft and sultry with Balabanian’s vocals in front, over understated guitars, percussion and occasional textural horns, swiftly carrying the songs through what sound like humid, lonely summer nights.

Much of Speck Mountain’s warm, stripped-down sound can be attributed to the group’s recording methods, recording everything to tape rather than to hard drive. “We’re trying to record a record in the way that records used to be recorded,” says Briedrick. This means that the possibility of adding a little Large Hall Reverb or 1960s Fuzz from a digital preset would then be out of the question. All of the effects that the band uses are analog. “A lot of it really is that we listen to old soul and old classic rock and we like the way those records sound and new music—it tends to sound sterile. Its really just a preference.”

After a European tour in November, Briedrick and Balabanian plan to take the next year and to write and record the best record that they can possibly make. “We’re hunkering down,” says Briedrick, “We’re going to make our ‘Dark Side of the Moon,’ our ‘Aja,’ our ‘Rumors.’” (Todd Miller)