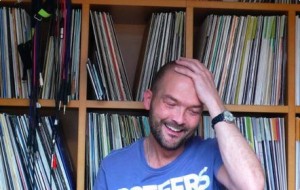 After all these years, Ben Watt is still best known as the beat-wizard behind the angelic voice of Tracey Thorn in Everything But The Girl. But Watt’s life after EBTG has been dedicated to the art of DJing, be it by setting up a great label in Buzzin’ Fly, producing hit tracks like “Pop A Cap In Yo Ass” and “Lone Cat,” or touring the world performing—you know, when he’s not publishing memoirs about his life and battle with a rare life-threatening auto-immune disease (“Patient,” published in 1996 by Penguin) or breaking artists like The Libertines at one of the London clubs he co-owns. So yeah, forget all that, for tonight he’s just spinning records. As a DJ, he possesses a deep soul and affinity for happy, thumpin’ house—much like his earlier productions. Although he hasn’t released much in the last couple years, his last visits to Chicago showcased a newer, tech-influenced direction, apparent in his more recent productions. Watt has managed to use his passion for music to stay relevant, as Buzzin’ Fly has helped break newer talent worldwide, like San Francisco’s Justin Martin, and French deep innovators Manoo & Francois A. Supporting Watt on the decks tonight is Brad Owen, who also knows a thing or three about house music, be it deep and thumpin, or twisted and techy. (Duke Shin)