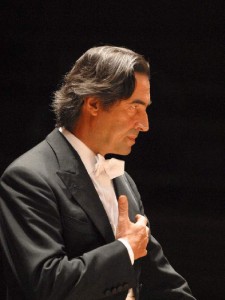 Keeping up with Riccardo Muti while he has been in town these two weeks has not been an easy task: not only has he been rehearsing the orchestra, conducting concerts and already holding auditions, but he charmed CSO trustees, the media, the public at large, even the mayor. The big discussion with the mayor was about “Chicago pizza,” which Muti admits he likes, despite it being “forty times thicker” than what his native Neapolitans, whom he insists invented the dish, would call pizza.  “Thirty years ago in Germany I found that it was very easy to make music there, but you couldn’t eat there: there was no olive oil in the entire country.” As to why Muti picked Chicago over New York, which had courted him for years: “Every place makes the claim that theirs is the best orchestra in the world. It turns out that Chicago is right and the rest are lying. Saying ‘yes’ to leading an orchestra is much like becoming involved with a beautiful lady: yes, you could have a ‘fling,’ but sometimes you meet one that is so interesting, so fascinating, that you want to share your intellect and bond much more deeply.” Muti finds Chicago a “very clean city,” hardly surprising since the centuries-old tradition of Naples is to toss garbage out the window. Muti wants to expand the audience of the CSO to the community at large, to neighborhoods, even prisons. “We who have so much must give back to the community.”  Muti especially wants to reach out to the young, “not just the ones from rich families, the joy of feeling the music.” At his first subscription concert last week, the coughing and hacking was so loud as he began the hush of the Bruckner Second Symphony that Muti abruptly stopped and began again. Performing the same piece for a younger crowd at a free performance Saturday afternoon, he complimented the audience after the piece on how attentive it had been. “We feel that deeply,” he said, “and it completes our performance. It is a mark of culture and civilization.” This week, Muti will conduct the Brahms “A German Requiem,” a piece for vocalists (soprano Elin Rombo and baritone Russell Braun) orchestra and chorus that will play to his strengths as the longtime former director of La Scala. If last year’s Verdi “Requiem” is any indication, this is a “don’t-miss concert and the last opportunity to hear Muti before he officially becomes music director next fall.  (Dennis Polkow)