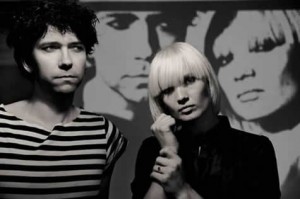 The idea behind The Raveonettes—the merging of 1960s Phil Spector pop with late-1980s shoegaze—was obviously natural. Of course, take the principles of production within the Wall of Sound (mainly, to drown out things with reverb), then synergize them with the principles of shoegaze (mainly, to obliterate things with distortion) and the dual harmonies of the Everly Brothers. Bang! So long as a girl is singing, you’ve got gold. Thankfully, Sune Rose Wagner and Sharin Foo have not tinkered with the fundamentals of their existence for their newest record, “In and Out of Control,” the fourth such album to feature grimy instrumentation and seductive, layered vocals, the musical equivalent of some Scandinavian beauty riding through a beach on a motorcycle. I sometimes wonder—since I dig the shoegaze distortion and pretty much worship surf pop—why the Danish duo isn’t one of my favorite bands, and I can only conclude that either A) the songwriting is a little too cheeky, or B) music from Denmark can never be transcendent (sorry Mew and Lars Ulrich!). Nevertheless, The Raveonettes have indisputably emerged as dependable, premiere pop-makers, and this new album might be the catchiest, most streamlined thing they’ve done yet. (Andy Seifert)