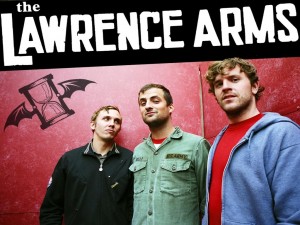 For many punk-rock fans growing up in the city there have been a handful of bands that have withstood the test of time. So when a band hits a milestone, like a ten-year anniversary, needless to say it’ll be a big party. And so it goes for Chicago’s very own Lawrence Arms. Neil Hennessey, drummer extraordinaire, began playing in his basement growing up in Mount Prospect. “In high school I would unknowingly start to tap my pencil in class,” Hennessey says. His road to becoming one of Chicago’s busiest drummers was to follow.

The Larry Arms began in 1999 after all their old bands had called it quits. For Hennessey, that was the band Baxter, fronted by Tim McGrath, now in Rise Against. Since forming, the Larry Arms have released multiple albums on Fat Wreck Chords, toured the globe and kept their personalities intact. As a young band, some of their initial experiences on tour were pretty hairy, as Hennessey recalls, “Playing a methadone clinic/squatted military complex in Ljubljana, Slovenia on our first European tour in 2000 was pretty eye-opening. Seeing the world with your own eyes, and not through television, magazines or a movie screen, is the best way to learn about it all.”

Keeping busy, Hennessey also plays with the Smoking Popes and Lawrence Arms side projects Sundowner and The Falcon. And if that wasn’t enough, he works as a recording engineer. “Engineering music is something I’ve gotten into,” Neil says. “I only do a session or two a year and really only record my friends.” He is like Chicago’s equivalent to the Police’s Stewart Copeland, writing, recording and playing. “It’s a great way to live if you don’t like having a lot of money,” Hennessey jokes.

Growing as a band in the local punk scene, The Lawrence Arms have made their mark playing anywhere from basements to festivals. One of their first home bases was the now-defunct Fireside Bowl and it’s closing sparked a notable change for the band. Hennessey adds that “The Fireside closing made it hard for the all-ages crowd to find a consistent home for shows.”

Seeing the Larry Arms live is like watching a bunch of friends joke around with each other while dozens of fans holler along, as if an extension of the band. The anniversary show shouldn’t be any different. With ten years under their belt, Neil assures that, “Not too much has changed. What’s great about the Lawrence Arms is that we’ve always done exactly what we’ve wanted to do.” (John Wawrzaszek)