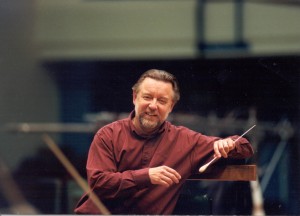 It would be difficult to imagine a more striking contrast than CSO music-director-designate Riccardo Muti’s performances of the Verdi “Requiem” last January and his rendition of Brahms’ “A German Requiem” last week.  With Verdi, Muti was in his element and the result was an experience as exciting as it was poignant and prayerful.  With Brahms, Muti was in way over his head and was unable to make sense of Brahms’ intentions, which were to offer comfort and conciliation. In Muti’s hands, the usually foolproof work which even amateur choral societies can usually bring off, fell decidedly flat. Not only was this the slowest and most turgid traversal of the work imaginable, but there was little by way of dynamic contrast, to say nothing of heart. This was a cold, cold, cold performance that showed us that decades of leading operas at La Scala is no guarantee that Muti will triumph just because the forces are expansive.  This week, Lyric Opera principal conductor Sir Andrew Davis heads across town to conduct the world premiere of James Primosch’s “Songs for Adam,” a thirty-minute song cycle with baritone Brian Mulligan that forms a sequel to his 2002 “From a Book of Hours,” also commissioned and premiered by the CSO.  Also on the program are Mendelssohn’s “Scottish” Symphony No. 3 and Stravinsky’s “Dumbarton Oaks.”  (Dennis Polkow)