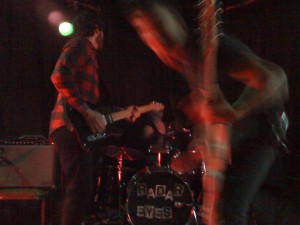 When three of the four members of the now-defunct punk band Night of the Hunter began writing songs that were a little more melodic than discordant and a little less aggressive than the angry, growling sound that they had been accustomed to, it was only fitting that the new songs deserved a new name. Radar Eyes is the product of that progression. That is not to say, though, that Radar Eyes has completely lost that edge. Just when one might conclude that the band’s style has gone completely the way of Joy Division or The Cure, the listener is given small reminders of the punk origins of the band through little bursts of screaming near the end of one song or a swell of heavily distorted guitar in another.

After nearly two years as a band, with the exception of a few burned CDs that were handed out at shows until they ran out, Radar Eyes doesn’t yet have a proper release to speak of. But the band has what drummer Shelley Zawadzki refers to as “little mini releases” in the works for the near future. “We’ve been working on a [cassette] tape release, we’ve got a seven-inch coming out with Victim of Time early next year and then we’re going to be on a compilation for Rococo Records,” says Zawadzki.

The tape release is set to be a small run of 250 copies, but I still don’t understand the point of yet another band putting out a tape. “The other members of the band are big fans of kind of low-fi recordings,” says Zawadzki. She also goes on to explain that the band simply sees the opportunity it as a quick, cheap way to get some songs out there and generate some interest. Fair enough.

On Wednesday, Radar Eyes will share the stage at Empty Bottle with Factums, Bloodyminded, Zola Jesus and Is & Vertonen in celebration of Rococo Records’ five-year anniversary. According to Zawadzki, these bands and more will also be featured on the forthcoming compilation along with Radar Eyes. (Todd Miller)