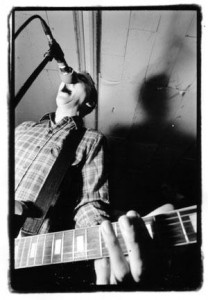 It’s fall, the time of homecoming season, and in that vein the stage is set for the reunion of The Ghost. A Chicago band by way of San Francisco, which didn’t come into its own until the members transplanted to the Windy City—Brian Moss, guitars and vocals, and Randall Bleichner, drums, have since moved back to the Bay Area after the band called it quits. “I think most of us identified more as being a Chicago band,” explains Moss. Bliechner concurs, adding, “I consider us very lucky to be part of the scene when we were. It was a perfect storm of right place, right time, fueled by tons of Old Style.”

The Ghost hit the scene for almost five years before the breakup in 2004, its career cut short for myriad reasons usual to most bands. “A difference in aspirations, tension from excessive touring and exhaustion,” says Moss. In that time The Ghost released two full-length albums, the debut being “This is a Hospital,” recorded by Steve Albini. The recent re-release of this album by California’s Solidarity Records prompted the band to reunite for a few shows. “It just seemed like a fun idea, and what better time to do it then when our record gets re-released,” exclaims Bleichner. “We did one show in San Francisco in August,” says Moss. After the Chicago reunion, the band will play the largely popular No Idea Records Fest in Gainesville, Florida. “No one really cares outside of Chicago, the Bay and a few spots here or there,” jokingly explains Bliechner.

If a string of shows like this could seemingly put The Ghost back on track full-time, Bliechner states that “a tour would be too much as we all have jobs, school, etc.” Moss agrees—his life juggles duties as a high-school music-program instructor, small independent-show promoter, freelance music journalist for the SF Weekly and graduate school. And on top of that, Moss still has his solo project Hanalei, which will also be playing in Chicago on this visit. Moss addresses the band’s future simply stating, “I’d say that it’s pretty unlikely.”

Bliechner is grateful for their reunion as he enjoys “being able to play with these guys again, and being on a stage with three of my best friends.”  Moss also views this as “an excuse to travel together and being able to get a bunch of people we love to come hang out with us.”

The Ghost’s visit to Chicago includes more than only music. Looking forward to their home away from home, Bleichner anticipates, “Seeing all of our friends that we hardly get to see since we’ve moved.” Moss echoes, “Seeing our old friends, inciting debauchery, stomping around the old haunts and eating at Sultan’s Market.”  (John Wawrzaszek)