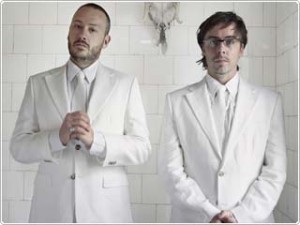 It was a sweaty night out during a midsummer Thursday eight years ago, which might just qualify as the Cretaceous Age amongst current-day club goers. Upstairs, the deep house sounds of Ian Pooley kept it moving at Fifth Floor, while downstairs, in Rednofive’s previous life as a global DJ destination, two British selectors named Felix Buxton and Simon Ratcliffe destroyed the collective Fridays of everyone in attendance, keeping clubbers out way past their bedtimes on a school night. Felix and Simon are of course the dance-pop icons known as Basement Jaxx. But back then, the duo was better known for their maximal approach to fun-loving house tracks like “Red Alert,” “Rendez-Vu” and “Jump ‘N’ Shout.” Their second full-length album “Rooty” (an homage to their Brixton club night) had just been released, and their rise to marketing crossover heaven had begun. By the time “Rooty” ran its course, the Jaxx would see five singles released, licensing for numerous adverts, massive live festival performances (complete with Gorilla-suited dancers), and the rest, as they say, is history. Tonight, these two survivors of the electronica-as-next-big-thing era return for their first DJ set since that night long ago at Redno. While circumstances might’ve changed—DJing the Congress Theater instead of a midweek grungy basement—it should be interesting to see just what currently moves the superstar producers behind the decks. The Jaxx recently released their fifth album, “Scars,” so expect their set to be peppered with new material. Also performing live are electro buzz saw MSTRKRFT (hoping to prove their fifteen minutes of club fame hasn’t run its course), and the always exciting and unpredictable Modeselektor, who can die knowing that they’ve recorded with Thom Yorke and had him sport their t-shirt while performing at Lollapalooza a few summers ago. Holier-than-thou rock gods aside, Modeselektor deserve the attention and adoration they’ve gained for their dub/tech atom-smashed sounds, which prove you can be heady and have a sense of humor. (Duke Shin)