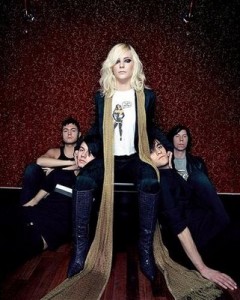 Swedish new-wave poppers The Sounds were destined to be huge the moment their debut, 2003’s “Living in America,” dropped in the U.S. It’s fun, fluffy dance music fronted by a hot badass blonde, Maja Ivarsson. Despite that, numerous late-night TV appearances and having “Dance With Me” featured in a VH1 commercial that aired every five minutes, the band wasn’t able to gain a big following here. Their sophomore effort, 2006’s “Dying to Say This to You,” helped raise their profile a bit after the song “Hurt You” was featured in one of those Geico caveman commercials, but it was the spring and summer arena tours with Fall Out Boy and No Doubt in support of this year’s “Crossing the Rubicon” that helped them finally reach that wider audience they should’ve had six years ago. Ivarsson is an energetic, commanding frontwoman, always able to work the crowd into a frenzy, and this is the last stop on their North American tour. You like to dance? Then come on! Come on! (Kelley Hecker)