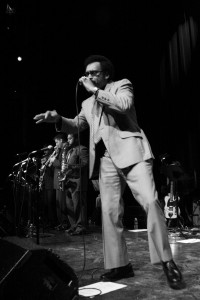 A nice moment from 2000 film “High Fidelity” finds a young record-seeker asking down-and-out record-store owner Rob Gordon, “Do you have soul?” He says it all depends. A quick but insightful moment in the film, it’s taken on an unexpected resonance, at least for me, and especially for anyone living in Chicago who’s also been overwhelmed by the amounts of soul music currently spun at bars and clubs during various monthlies.

You can make an argument that soul is the most difficult kind of music to dislike—often joyous, emotionally expansive, relatable and raw, the nerves of the performers are almost always exposed. You dance, and you dance hard. The gentler moments are a welcome breather. If you’ve attended any of the Windy City Soul Club’s evenings at Sonotheque, soul music is in continual replay in your body and mind. (And if you haven’t been to a Windy City Soul Club event, shame shame.) It’s music with a history, it’s both personal and public—there are stories in the grooves of each 45, old stories begging to be told again and again.

The Numero Group, the premier reissue label founded by Ken Shipley, Tom Lunt and Rob Sevier back in 2003, has, with an unreal level of meticulousness and patience, consistently assembled compilation packages that highlight obscure, often regional recordings from another era. The work the label puts in helps to not only get these long-lost recordings heard, but also keeps them preserved (through a remastering process) and sounding, quite simply, great. With each release Numero attempts to tell the story of the artist, or the label, or the studio, making each track’s appeal even deeper. While the label has dabbled in gospel, country, R & B and disco, its soul reissues—the “Eccentric Soul” series—are some of the best collections of obscure soul you’ll ever find. For soul connoisseurs, Numero’s doing the work for you.

Earlier this year Numero presented its Eccentric Soul Revue, an evening of musical performances at the Park West structured much like the concerts of the past, and featuring soul talent Numero unearthed that could’ve otherwise gone unknown. A resounding success, the revue brought Numero even more attention, and this week the Soul Revue returns, as it plays the first date of its tour here in Chicago at the newly christened Lincoln Hall.

“Once you’re interested in independent music, you become aware of the phenomenon of people releasing their own music, music that exists outside of the radio zeitgeist,” Rob Sevier says. “It’s something that naturally becomes fascinating, when you discover it’s been going on since the beginning. For almost as long as there has been a music industry there has been some form of an independent music industry. When you learn that, like, this is the equivalent of your favorite punk label in the 1960s, you want to know about that. In a lot of ways what’s really appealing about it, we’ve been able to sell stuff to people in their thirties. You liked Dischord? This is the soul Dischord. You like Trax? This is the R & B Trax. I think that’s how this stuff comes across.”

The “Eccentric Soul” releases are bubbling over with talent, musicians and singers who, without knowing the exact story behind them, you’d think would have been stars of their time. “What creates a star at any given time is kind of complicated,” Sevier says. “I wouldn’t say that these guys were unlucky—not everyone could become a star. The other thing that is missing, a lot of times, [you could be like] ‘These guys are great. It’s 1973, great early-seventies music.’ But if you really look closely sometimes, sometimes it’s a matter of well, this is 1973, but that was in vogue in 1972. It’s easy to forget that kind of thing. Time has passed, and ’73 and ’72 don’t sound that far apart, but really it’s forever when you’re putting out a record every week.”

So much goes into the Numero Group’s releases—there’s so much more work to be done after they actually find a record they want to re-release—one would imagine it can grow a bit frustrating, but Sevier insists it’s all part of the experience. “The reality is that the amount of time it takes finding [a record] and releasing it, it can be years and years. When you find a new song, you’re just excited about a new song, it’s not anywhere close to the release stage. Right now, I got a board [in the office], of things that have been up there for years. So many projects take years and years. It’s a constant process of new discovery, but it doesn’t very quickly translate into a new release.”

He continues, “Patience…that’s not really any of our strong suits. But, it’s like, it must be frustrating to mine for coal, but there’s not any other way to do it really. It’s literally, with this, there’s no other way. It’s a matter of reality. Things take a long time. Every step takes a long time. So it’s not a big deal.”

[…] was quite suprised to see so many of his quotes completely unedited in this article, Souled Again: Numero’s Eccentric Soul Revue Returns, about how the tour and our records have come together over the years. Leave a Comment No […]