by tomnewcity
November 3, 2009Filed under: 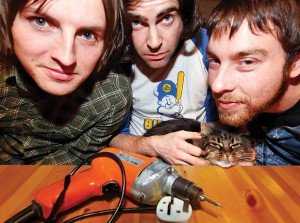 For a moment in time, Mclusky was as strong as any other band in the world. “Do Dallas” and “The Difference Between Me and You Is That I’m Not on Fire,” incredible, vicious records, will have to serve as evidence of a Wales band that was gone too soon. But life goes on, and now there’s Future of the Left, which includes Mclusky front man Andy Falkous and drummer Jack Egglestone, plus Jarcrew bassist Kelson Mathias. Two albums followed—2007’s positively furious “Curses” and now sophomore disc “Travels with Myself and Another,” on 4AD, a half-hour uppercut of post-punk rage. Falkous, acerbic and witty as ever in his lyrics, tears his throat out in delivery. It’s loud and a little mean and very great.

“Absolutely,” Falkous says when asked if he feels pressure with each release given Mclusky’s devoted fan base and this new band’s reputation for being relentless and unforgiving during its live shows. “Obviously there is pressure from people who’ve liked both bands, who expect a standard from me. But more than anything there is a personal pressure, and also, playing these songs out for a year and a half, all around the world, you better like the songs, because if they are half-assed impressions of what you did before, it’ll be hard every single night taking to the stage.”

Falkous continues, “You strive to make the best record you can, play the best rock show. We never think that we could be the second-best band on the bill tonight. Even when you play with bands [you like], you want to wipe the floor with them and make them question why they’re doing it.” He laughs. “That sounds terrible, but it’s true.”

Those live shows can take their toll. “It does on my voice, definitely,” Falkous says. “You try not to do more than four shows in succession, which is a pain in the ass. When you have days off in a remote European location—and I’m thinking Switzerland here with a heavy emphasis—it’s incredibly dull. I’ve devoted my life to making music, not so I can sit in a hotel with no money and listen to a man with a beard snore. That’s when being in a band is work.” He’s only lost his voice once during a show, though. “For live shows, obviously we have shows we don’t enjoy so much if the crowd stares back with dull disinterest. But the second we start to play, it’s impossible to play a half-assed show. I can’t phone in that performance.”

Falkous has spent lengths of time in Chicago in the past—Mclusky recorded with Steve Albini—but his one distinct memory should sound familiar. “New Year’s 2004, my god, it redefined cold, even for a Brit,” he says. “I’m from the north of England and I thought I knew what cold was.”

“I should not pretend otherwise.”