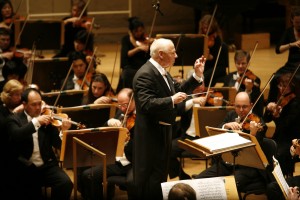 Bruckner was a favorite composer of the two most recent CSO music directors, Sir Georg Solti and Daniel Barenboim, both of whom recorded complete Bruckner symphony sets with the orchestra. By contrast, music director designate Riccardo Muti has performed few Bruckner symphonies over his long career, although the early Bruckner Second, which he did offer in his fall residency here, is a particular specialty and his performances of the piece were indeed revelatory. Muti has never traversed the later and longer Bruckner symphonies, although these have long been specialties of Bernard Haitink and, as such, this week’s partnership of the CSO and Haitink in Bruckner’s last and unfinished Ninth Symphony should be a particular highlight of the 2009-10 season. Although Muti recently expressed that he wanted to keep Haitink and Boulez as regular guest conductors during his tenure here, it is by no means certain what repertoire will be left to them, so this could be a one-shot repertoire deal for Haitink and the CSO.  Opening the concert will be Haydn’s Sinfonia concertante with CSO co-concertmaster Robert Chen, principal oboist Eugene Izotov, principal bassoonist David McGill and principal cellist John Sharp.  (Dennis Polkow)