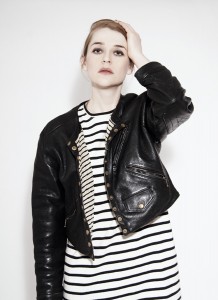 When Sarah Assbring, aka El Perro Del Mar, debuted her material in the form of her self-titled first record, an unusual sadness swept through her music more than anything else. Her genuine heartache made the foundation for the mostly acoustic, 1960s-orchestra-pop-inspired material, as the Swedish songwriter trampled through one melancholy song after another. Assbring presented an honest sweetness as well as she described her solitude; you wanted to take her in, tell her it’s all going to work out just fine.

In 2008 she kicked out her second record, “From the Valley to the Stars,” a sort of 360-degree turn lyrically as it seemed Assbring had finally found that elusive happiness. Musically similar to its predecessor, the instrumentation was still considerably sunny, this time with words to match. A likeable record, though not as affecting as the first, it serves as a sort of closing chapter to the acoustic, minimalist El Perro Del Mar.

“Love is Not Pop,” Assbring’s new “mini-album,” sees the musician embracing more studio tricks and technology as she hooks up with Studio’s Rasmus Hagg to help produce. It’s another Assbring breakup record, but the songwriter seems more confident here, a strength that’s backed up by various electronic elements, including beats, synths and multiple vocal tracks. The new direction suits her: this expansion of her sound makes for a more eclectic experience and it shows that Assbring can break out of her comfort zone.

“I usually start with some key elements, and usually get a clear idea of a theme, at least something for me to hold on to as a theme. Usually that’s the way it is when I start working,” Assbring says. “I need to have something to hold it together. With this album it was more so…I had a really concrete urgency in my own life to do it.”

So she felt compelled? “Yes, definitely, in every way,” she says. “In a personal way it was a means of trying to reach out and communicate with another person. In that way I felt this was an album that has to be short, and direct. It needed to be done quickly and needed to get out there quickly.”

Up until this record, Assbring worked on her own, composing and producing her first two records without much outside input, if any at all. She knew it was time for a change. “That was the absolute first thing that I knew about making this third album,” she says. “I felt that I had reached as far as I possibly could recording- and producing-wise, having done everything on my own. I always seemed to be working…it was very important to me to rely on myself and my limitations. I was always trying to make something good out of my limitations. And with the second album, I felt like, ‘OK, I’ve done this now.’ I kind of went as far as I could with this principle. The best thing for me and my music was to move on and put someone else in. The further I got along with writing the songs, and planning this album, it seemed to me that Rasmus was the only person I would be able to confide in. With his music, with Studio, he seemed absolutely perfect.”

Assbring says that working so closely with another person on her music was uncomfortable at first. “I was terrified,” she says. “I know that I can be—part of the reason I was choosing to work alone—I know that I can be a complicated person, very stubborn. A perfectionist. I can drive people crazy with that. For me, the natural thing is, ‘I can do this on my own, I don’t want to put any other person into this.’ Still, I felt I really did want to work with him, and very early on in our discussions, [I found that] we were very similar. We both are perfectionists, both very used to working alone. It just happened, by coincidence, that both of us were keen on trying to get out of that isolation.”

Upon even the first listen to “Love is Not Pop,” it’s clear Hagg had a large influence, if only for the abundance of electronics. “When we started talking about it, I said I wanted to turn my music into something more synthetic-sounding, and I was like [to Hagg], ‘I know you’re so good at that,’ and he was like, ‘Oh, I love your acoustic guitars and I’m kind of bored with the synthetic songs,’” she says. “And I was like, ‘Damn. We’re meeting at the worst possible time.’ That’s what made this album so good, in a way I was compromising. We found compromise in using actual real instruments and then tweaking them, making them sound synthetic. We met halfway.”

Compromise is a new thing for Assbring. “My initial vision was kind of lost,” she says of the new record. “But that was only for the better. It was a good thing, and I would say this is the first time that I’ve ever experienced a good thing about compromising.”