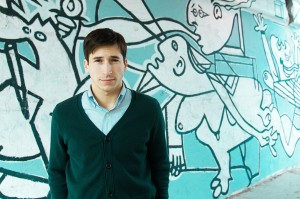 Andy Rosenstein formed Clip Art after a long time of being a contributing member in many different bands. So, with the intent of writing and having songs that were his own, he began recording. “I really had no idea what I was doing,” says Rosenstein of initially recording the songs that he’d written. As time went on, Rosenstein eventually realized that he needed help and he recruited some other players to play on the recordings, a group that has also become the live band and the rest of Clip Art.

With a background of interest in filmmaking and a day job as a public radio producer, Rosenstein has a more unique concept of the songwriting process than most. “When you’re writing a song, you might have all of these different ideas of what you want to do, but if you put them all in, it wouldn’t make sense, it wouldn’t be fun for people to listen to and it would be way too long. So, I tend of think of songwriting as a process of editing and pulling things out.”

Rosenstein also views editing within songwriting as a way to make his songs accessible for people, something taken directly from his experience producing a jazz show for radio. “I met a lot of people who were either good or bad at explaining what they were striving for. That made it clear to me that you need to be able to make sense of what you’re doing for people.”

While this process may have helped Rosenstein cut certain unnecessary parts out of his songs, using multiple harmonies is one element that Rosenstein has opted not to edit out in many cases, which, coupled with his piano playing, brings a warmness to the music. Recreating these harmonies in a live setting is important to Rosenstein, who is currently looking to fill the role of another vocalist to add to the live three- and four-part harmonies that are present on the recordings.

Although Rosenstein is primarily a piano and keyboard player, his songwriting isn’t limited to the piano. Recently, he’s been branching out to writing songs on the guitar. “I’m writing really, really different kinds of songs [on guitar].”

This past summer, Rosenstein has been on a writing tear, whether on piano or guitar, recording more songs than he has ever been able to in the past. “I [usually] start lots and lots of songs, but I finish very, very few of them.” But after writing his way through the summer, Rosenstein and Clip Art have one EP, the band’s debut, which is heading to production soon, and another batch of songs ready to record and release as another EP in the near future. (Todd Miller)