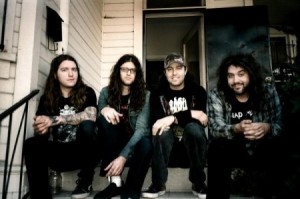 If Black Sabbath and Iron Maiden had a baby and then early Metallica did the nasty with Motorhead and popped one out, even before those two shimmering newborn babies were born, Saviours would be the second coming of pure unrequited heavy metal. Incorporating chugging, down-picking power chords with melodious harmonies and topping it all with lightning-speed solos, Saviours are a contender for what metal’s past brings to today’s high-voltage progression.

The foursome formed in Oakland during the fall of 2004 and has released a number of albums and EPs during its tenure, including two seven-inch releases featuring covers of Saxon and Judas Priest. Between the Web and shows like “Headbanger’s Ball,” Saviours are able to reach an audience that wouldn’t have the exposure in past generations, even though the band eschews social forums as MySpace and Facebook in favor of a simple blog site (killforsaviours.blogspot.com).

Drummer Scott Batiste says, “Austin Barber [vocalist and guitarist] and I just wanted to do a heavy band that was crushingly loud with killer riffs taking inspiration from the punk and metal we grew up on. We wrote the first batch of songs in a month and started playing shows and the rest is history.”

Fresh off of winning a Goldie Award from the San Francisco Bay Guardian (“Outstanding Local Discovery”), Saviours will be embarking on yet another U.S. tour in support of their latest album, “Accelerated Living,” which came out late last month on Kemado Records. Along with constant touring throughout the United States, Saviours have performed globally in more than seventeen countries. Batiste said in another interview that he writes many of the songs on a distorted bass guitar, “If it sounds good like that, it will sound good when we all play the riff together. Then we build from there and everyone adds their own thing.” Some of those things include influences from all subcultures of metal, ranging from death, black, speed, classic, thrash and stoner.

Rising from a region where the psychedelic phenomena gave the world its first taste of tie-dyed, reefer-smoking hippies, Saviours slithers away with a twisted augmentation of the free-spirited mindset that shaped today’s music. More reminiscent of the Bay Area scene in the early 1980s where bands like Exodus, Megadeth and Testament ruled the Fillmore, the group borrows the punk-influenced sound of New Wave British heavy metal. “Of course there’s the classic thrash legacy here but there’s a lot of great bands here now and a lot of people going out to see live metal,” Batiste says. “It’s pretty killer. We’re into all sorts of stuff, eighties metal included. I’m sure some of that has found its way into our sound. Comparisons are pretty meaningless to us though.”