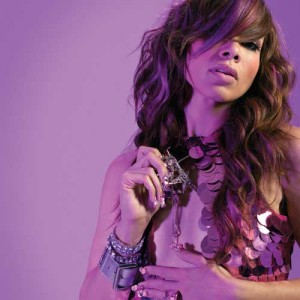 For people of a certain age, watching Wrestlemania as a child on cable is a beloved memory. For Melisa Young, aka Kid Sister, it’s from that annual tradition that she fell for Koko B. Ware, the “Birdman,” the Hulk Hogan-era African-American WWF wrestler who carried around a pet macaw. “Koko B. Ware” was to be the title of Kid Sister’s debut record, but the Federation—now known as the WWE—wouldn’t even consider allowing Young to use the name.

Such a devotion to nostalgia, to origin, to not-forgetting-where-she-came-from has helped give Kid Sister some street cred and popularity over the last two years, all without having a full-length album. Young possesses a girl-next-door charm—and works it to her advantage, too—so that even if you try to fight it, you find yourself rooting for her. Her Kid Sister moniker helps to immediately position her as the universal girl everyone helps build up and protect.

Her rise as an artist is unique not only for her rapid ascent but also because of her determination to remain true to her vision.

In 2007, the south-suburban Markham-raised Young was on public aid and working at a baby-clothing store. She had studied film at Columbia College and spent a brief time in New York, but staying there wasn’t financially feasible and she headed back home. Meanwhile, her younger brother Josh—J2K of local DJ duo Flosstradamus—was building a career for himself during residencies at the Old Town Pub.

“We were both kind of, together, ‘I’m writing these little songs, what do you think?’” she says. “My brother would always send me his mixtapes—‘OK, I did this transition, what do you think?’ ‘Yeah, it’s great, why don’t you try this. This is dope.’ And so then the tables were turned. He encouraged me and that was that. With his encouragement I felt the confidence to get up there.”

Her first proper show, she says, was at Hideout in 2006, and not long after with the help of her brother she had recorded “Pro Nails,” her lovable hip-hop ode to the delight of getting her nails done. Through her relationship with Alain Macklovitch—or A-Trak, DJ for one Mr. Kanye West—the song found its way into the hip-hop superstar’s hands. He liked it, added a verse on top of the song himself and appeared in the music video, and released the track on his “Can’t Tell Me Nothing” mixtape in fall of 2007. Boom. Stardom.

“The whole thing has been surreal for me,” she says. “The entire thing. I’m really blessed. I’m super fortunate. Don’t get me wrong—it’s a little weird. It’s not a normal life anymore. But, you know, who knows what’s really normal. I certainly don’t.”

Here’s where it gets a little shaky. After she had signed to A-Trak’s Fool’s Gold Records and the “Pro Nails” single landed her considerable buzz not only around the local club scene but across the media world—including a spot on the cover of URB—a major-label bidding war ensued, and Young landed on Universal’s Downtown Records.

And so the world waited for the disc. And waited. And waited some more. First she was tossing around the “Koko B. Ware” title, then it became known the wrestling world said no and the title had been changed to “Dream Date.” I spoke with Young last year a few days before her appearance at Lollapalooza and she told me she was just about finished with the record, that it had been a long and torturous road achieving what she wanted but that the hard work was worth it and she was ready to unveil it to the world. It’d see its release in fall of 2008. And then nothing. After some time had passed word came down the wire that “Dream Date” had been postponed again, indefinitely. “Chinese Democracy” jokes bubbled over on blogs. Was Kid Sister not meant to be?

Meanwhile, this entire time, her popularity had been building, playing festivals around the country including Coachella and Lolla, being nominated for a best-female-rapper BET award, plus fielding continuous interview requests from journalists wanting to get the scoop on the next potential queen of hip-hop.

“That was the whole thing,” she says. “My press never stopped. I kept doing interviews. I was doing interviews about an album that was not coming out. My publicist was like, ‘You know this is weird right?’ And I was like, maybe this is not typical. But I’m not a typical person.”

Ultimately, when the notice came a few months ago that Kid Sister’s debut record, now titled “Ultraviolet,” was set for release on November 17, eyes rolled and it was taken with a grain of salt. Then the record arrived in the mail. I’ll be damned, it’s really happening.

It’s hard to imagine a major record label maintaining patience and understanding for all that time. “They pretty much let me do what I wanted to do,” Young says. “It happened really naturally. ‘Go. Go and do it.’ That’s what happened. It was pretty unusual too for them to kind of let someone else—in this case, Fool’s Gold and me—take the reins and do what we wanted to do.”

She continues, “I was working just as hard as I could. It was all on me. It wasn’t on anyone else. I could only be as mad at myself as I was at anyone else.”

On the morning we spoke—last Friday, the evening of which she made her late-night-television debut on “Late Night with Jimmy Fallon”—she still hadn’t yet seen an actual copy of “Ultraviolet.”

“I’m pretty excited to one day get the physical copy,” Young laughs. “I’ll probably pee my pants. Clean up on Aisle 4!”

Perhaps the most incredible part of Kid Sister’s career up until this point is that “Ultraviolet” is, without question, worth the wait. 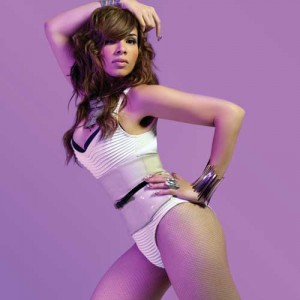 Those expecting a relatively straight hip-hop record didn’t reckon with the crossover appeal of her first hit “Pro Nails.” In fact, Young and her producing crew wound up scrapping her initial sound, ditching traditional hip-hop tracks for a new hybrid breed, creating a record that teases with electro pop, club-party bangers that are uplifting sensations. Dance, you will. The synth-and-beats retro-eighties-style is in full force—more than anything, with songs like opener “Right Hand Hi,” “Life on TV” and “54321,” Kid Sister has produced a fun, celebratory record, an album that somehow works both in headphones and blaring from party-room speakers. Her handful of guest artists impresses as well—the aforementioned Kanye on “Pro Nails,” Estelle on “Step,” Cee-Lo on “Daydreaming” and DJ Gant-Man on “Switch Board.” The star, nevertheless, is always Young herself, as her vocal style and lyrical prowess exude both a confidence and a vulnerability, a playfulness that still does not indicate an aversion to deeper symbolism. She’s a little sister who could beat your ass.

“Hip-hop is completely changing,” she says. “The music industry is changing. [It’s moving towards] this dance aesthetic. I’m glad I can be at the forefront of this music—it’s not very often I can say I was at the forefront of anything. Maybe working at Chipotle…”

You can’t just call her a hip-hop artist. “I’m an electro hip-hop artist,” she says. “That’s what I do. What I grew up with. It’s what makes the most sense to me, what gets me going.”

What she “grew up with” also informed the “Ultraviolet” title. “‘Ultraviolet’ really conjures up a specific aesthetic,” she says. “When I was 11 or 12, we were sneaking out, using fake IDs to get into the teen dance club, Jubilation, in Harvey. In there they played the craziest music—industrial, deep house, disco, all the music we wanted to hear. When I was thinking about where this album was taking me, it reminded me of that phase. At Jubilation, during the day, they had laser tag, and at night it was this dance club. Ultraviolet. Laser tag. Remember that? Dude, that was so dumb.”

She’s comfortable with being in the middle of a burgeoning movement. “I wanted something that says, without a doubt 100-percent, this is the face to go with the new sound,” Young says. “Everybody is doing a dance record. Dance is now pop. For me it had to be genre-defining, I had to make a genre-defining statement through this CD. That was my vision from day one and that was the vision I kept.”

Young feels that being female in the expanding hip-hop genre works to her benefit. “It’s gonna take a female to do what I want to do, to break down walls and bring people together,” she says. “Who says because music is mainstream it has to be watered-down shitty pop? I think it’s gonna be a woman to do it…because there’s no ego. There’s no, like, puffed-up chest. I go through my life just kind of like, taking it all in, being cool. There are artists up there, men, and they are just so bothered by everything, so into themselves. That’s not who’s gonna do it, I hate to break it to you.”

Her confidence and gender pride should not be mistaken for some form of feminism, however. At least, don’t speak the word. “That’s dumb,” she says. “It’s just trite. I don’t even know what it is. I think the part of feminism that I struggle with is the part that’s super aware of itself. Maybe I am a feminist, but one that doesn’t try, and I’m cool with that. I don’t, you know, wear potato sacks, and I don’t play hacky-sack on the quad, I don’t work with people from Greenpeace. I hear that word and I have that reaction. I’m a casual feminist—a feminist with finesse.”

Young still technically lives in Albany Park, but with her busy traveling schedule she’s hardly home anymore. She misses her dog Betsy, and she’s bummed when I break the news to her that Sonotheque, a venue she frequently performed at with Flosstradamus when she was just starting out, has been sold and has closed. Her plans now, though, are to stay in Chicago for the time being.

So, the big question—is she at a point where people are recognizing and stopping her on the street? 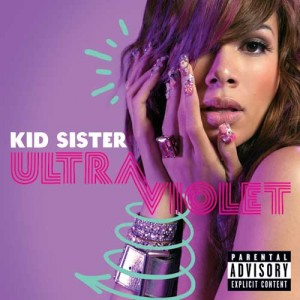 Backstage at Lollapalooza 2008 Kid Sister and a small entourage stormed the press area drawing looks from the sweaty, malnourished rock-writer set. She was immediately the most beautiful person in the vicinity, with an intoxicating glow reserved for celebrities and pop stars. She didn’t have to say anything. She was a presence. Her body language spoke for her.