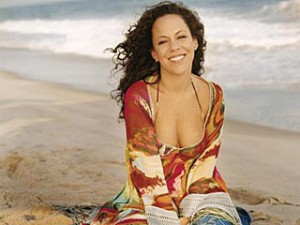 On her fourth disc, entitled “All in One” (the first on her new label, Verve), New York-born singer-songwriter Bebel Gilberto seems to have abandoned the New York pop experimentalism of her previous efforts and instead concentrates more closely on her Brazilian roots, which were the basis of her U.S. debut almost a decade ago. Instead of being mostly backed and produced by musicians from Manhattan’s Forro in The Dark, she co-produces with Daniel Jobim, Carlinhos Brown, Mark Ronson and longtime collaborator Didi Gutman with welcome results. For the first time, she covers a tune written by her father, Joao Gilberto (“Bim Bom,” in duet with Daniel Jobim). There is also a Bahia-tinged take on Stevie Wonder’s “The Real Thing” and an update on Carmen Miranda’s classic “Chica Chica Boom Chic,” the lead single from the disc. There are many originals penned in partnership with Brown and others, which are played with less emphasis on electronics—a characteristic that was ever-present in her previous discs. (Ernest Barteldes)