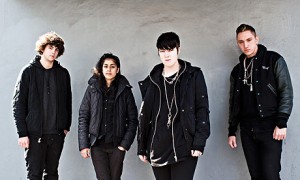 It’s a sparse musical landscape where the xx roam, with clean guitars, post-punk bass swagger and sparring vocal interplay between the cooing of guitarist Romy Madley Croft and bassist Oliver Sims, who also spends a fair amount of time mumble-harmonizing below Croft’s come-on verses, too. Anchored in space with machine beats making the most of the sparse arrangements, the xx are a revelation in minimalist grooves. Their self-titled debut album—produced by the xx’s own beatsmith/button-pusher Jamie Smith—was released earlier this year, and tonight’s show supporting headlining dance-rockers Friendly Fires is the group’s first trip to Chicago. (They will open for Hot Chip next spring.) Primed and ready to break big, this might be the last chance to see the xx in an intimate venue. (Duke Shin)