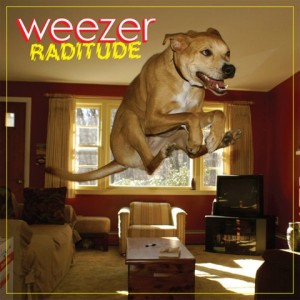 There are plenty of things about Weezer I can’t believe. I can’t believe Weezer’s resurgence, and “The Green Album,” is almost a decade old. I can’t believe “The Red Album” was that bad. I can’t believe some rock writers fell for the heaping bullshit that was “Make Believe.” I can’t believe some old-school =W= fans still cling to the hope that Rivers Cuomo will churn out a record as insightful, stunning and emo-tional as the band’s debut or “Pinkerton.” Forget it, fellas, it’s over. What I can believe, however, is that its possible to get to a place to enjoy Weezer on a purely surface level, the way one processes Foo Fighters or Snow Patrol or something. Slick, quick and forgettable. I can believe that Weezer’s new album is something called “Raditude” and features a flying dog on the cover. I listened to it once and it has no songs that I remember distinctly. I think I heard Lil Wayne on there. I have no real desire to listen to it again. I’m finished with my disappointment with Weezer and I’ve reached a peaceful place in which I’m quietly pleased Rivers Cuomo is still making records. I will no longer allow Weezer’s unambitious immature musical mediocrity harm my memory of how much this band meant to me in that long forever ago. And I’ll even admit that the flying dog is cute. But, and this must be said, I’m terrified that there is a person out there as obsessed with this record as I was with “Pinkerton,” because I don’t want to meet this person. This person is very dangerous. (Tom Lynch)