by Tomnewcity
December 1, 2009Filed under: 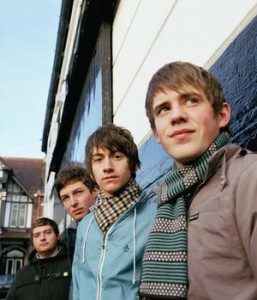 Sheffield’s hugely popular rockers the Arctic Monkeys set records when its debut, “Whatever People Say I Am, That’s What I’m Not,” was released in 2006. It was the fastest-selling debut in UK history, landing at number one upon its release (as did the two subsequent full-lengths) and spawning two number-one hits before winning the Mercury Prize. Follow-up “Favourite Worst Nightmare,” also nominated for the Mercury Prize, found the Monkeys more aggressive, loud and fast, and all twelve of its tracks entered the top 200. I didn’t understand the appeal. To me, both albums were typical Brit-rock that made me anxious (though to be fair to the Arctic Monkeys—vocalist Alex Turner, in particular—just about everything makes me curl into a ball of anxiety). Maybe that would change with 2009’s looser, more experimental “Humbug”? Nope. Now I was just bored. My opinions aside, the band has steadily become more engaging live and has an ever-growing fanbase. If you’re part of it, this show is not to be missed. (Kelley Hecker)