by tomnewcity
December 1, 2009Filed under: 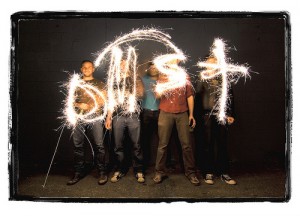 Toronto post-rockers Do Make Say Think have been together for nearly fifteen years and never once have given a shit about throwing out a three-minute pop song in an attempt to grab the attention of the ADD-riddled masses. Instead, Ohad Benchetrit, Charles Spearin and co. have stuck to what they know and love: sprawling instrumentals incorporating everything from the usual guitar/drum/keyboard/bass combo to flute, saxophone, horns and violin. The octet is touring behind its sixth release, May’s “Other Truths,” a set of four lengthy tracks, each named after a verb from the band’s name. The members of DMST certainly have a hell of a lot going on, as half are part of the indie-rock super-group Broken Social Scene, which has like 397 members, not to mention various side projects of their own. In addition to “Other Truths,” Spearin and Benchetrit each released self-titled debut solo albums this year, “The Happiness Project” and “Years,” respectively, and both are doing double duty on this trek. If experimental instrumental rock is your thing, these are the bands you need to be listening to. (Kelley Hecker)