by Tomnewcity
December 3, 2009Filed under: 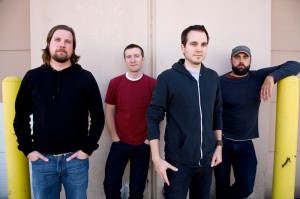 Maybe it’s the change of the seasons or something in the water, but it seems that the climate is ripe for band reunions. These one-off shows are fun, but certainly not as fun when they happen again a few years later. So arises a new phenomenon—bands staying together after reunions. This is the case with Michigan’s Small Brown Bike. Showing this was not to be only another reunion, bassist and vocalist Ben Reed asserts, “I’d say we’re back together, but being back together will probably look much different than it used to.”

Like old sea captains, they used to rule the national scene with incessant touring and releases on No Idea Records and Lookout! before calling it quits—the band’s last show was in Chicago at the legendary Fireside Bowl in 2004. (There wasa Bike reunion back in 2007 at Subterranean.) Being a band with roots in Michigan, they seemed to have an affinity for Chicago. Reed says, “Chicago has always been our second home. We’ve known so many people there for such a long time and we’ve always had great shows there. We consider Chicago an honorary part of Michigan.”

With the time off, Ben has made a home in Chicago and fronts the Great Sea Serpents; his brother and Bike guitarist/vocalist Mike Reed is in LaSalle, which has released albums on local label Thick Records. Yet eventually the itch to re-form Bike surfaced. “When we originally stopped playing in 2004 we all were feeling like we were ignoring other parts of our lives and ignoring our desires to play different types of music,” says Reed. “So now we’ve had a few years to try some other things and we’re feeling inspired again.”

Before playing as a band again, they already recorded and released a new record, “Composite, Volume One.” “The seven-inch we just released and the one we’re currently working on are No Idea releases, and we’re definitely working on more material,” Reed says. “We’re really excited about the new stuff we’re creating and we’re just focusing on making the best music that we can.” This has to be one hell of a commute for Ben in Chicago as the rest of the band is in Marshall, Michigan, but being close friends and family keeps this distance small. Plus it’s not like they are starting from scratch. Ben explains, “I think it helps that we’ve been writing songs together for so long; we already know our roles [and] styles and we’re more comfortable now with SBB being whatever comes naturally.”

But as all bands have seen in recent years, the advent of the Internet has greatly aided with the widespread distribution of Small Brown Bike’s music. “I think the fact that you don’t need to play a single show to grow a following is both a blessing and a curse,” Reed says. “Either way I think independent music is in a good place now, I just hope it’s sustainable and I hope people see the importance of consciously supporting the independent musicians they love.” (John Wawrzaszek)