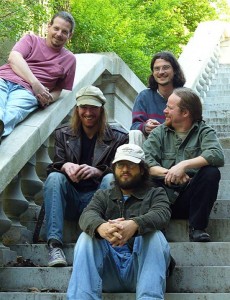 It might seem odd that an Ohio-based jam band would repeatedly be invited to perform in reggae-obsessed Negril, Jamaica. However, upon hearingEkoostic Hookah’s psychedelic improvisational music, one immediately gets it. After all, the sound they make goes perfectly with the inexpensive ganja most visitors, er, sample during visits to the small Caribbean nation that gave us Peter Tosh and Bob Marley—who incidentally both advocated legalizing cannabis in their native land. Formed in 1991 by vocalist/keyboardist Dave Katz, guitarist Steve Sweney, bassist Cliff Starbuck, guitarist/vocalist John Mullins and drummer Eric Lanese (who joined in ’93) after jamming together at open-mic nights, Ekoostic Hookah has become one of the most beloved bands in the national jam-band scene. They set themselves apart from the fray with their carefully arranged three-part harmonies and very open mind when it comes to music: in their sets you get a little bit of everything, ranging from jazz, folk music and lots of experimentation. (Ernest Barteldes)