by tomnewcity
December 8, 2009Filed under: 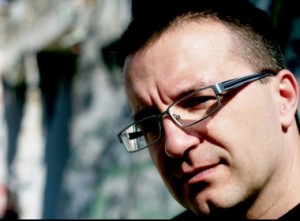 Winds of change are at work at Chicago’s favorite dance-floor institution, with new Smart Bar music director and talent buyer Nate Seider, aka Nate Manic, chomping at the bit to flex his creative control over bookings for 2010. While most of Smart Bar’s artist bookings up to this point have been vestiges of previous club boss James Amato, tonight marks the official “Welcome to Smart Bar” party for the recent Newcity cover-boy, featuring one of his personal deck heroes in the legendary John Acquaviva, co-founder (alongside Richie Hawtin) of venerable techno label Plus 8 Records, as well as his current home since 1993 in Definitive Recordings. His “X-Mix-3” mix released back in 1994 (!K7) was partly responsible for turning Manic on to the sounds of techno and house. Since then, the London, Ontario native and former Detroit mainstay has circled the globe as a DJ, recording and releasing tracks and remixes that change with the times. For this techno/house legend, forays into more electro and progressive-influenced sounds might have reached a cooler reception among techno purists from his Detroit days, but Acquaviva has always looked forward, never content to rest on his laurels, and ever-changing his sound to fit his fancy. But for all those neophyte deck slayers out there who might be tempted to brand Acquaviva a relic of a bygone era, you should know that he championed Serato’s Final Scratch system during its development and helped to unleash the single most revolutionary piece of DJ equipment released this millennium. And then there’s his role in launching a little download site called Beatport.com… It’s been at least a handful of years since Acquaviva performed in Chicago. Take into account the extended three-hour sets from both opener Manic and headliner Acquaviva, and tonight at Smart Bar becomes a night you won’t want to miss. (Duke Shin)