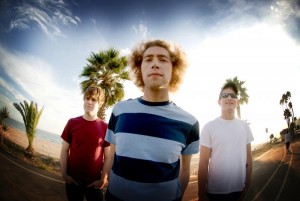 On this Maine-based band’s Web site, they describe their sound as “directly centered between Ramones and The Beatles.” Alongside distorted guitars and an overall high-energy groove, they feature 1960s-inspired melodic structure with close three-part harmonies. “When we started we were mostly influenced by bands like Screeching Weasel, The Queers and Bouncing Souls,” says Woronoff via email. “As we got older we all started to get back in touch with the music we grew up listening to as young children, which was the 1960s pop and rock our parents had.” Listening to their new disc, one gets what Woronoff means. Their music has an almost familiar feel the moment you hear their songs, but at once you realize they are not merely copycats. Tunes like “She She She” and “Up and Around” have a raw, unrehearsed feel until the guitar riffs and harmonies come in, and their 1960s influence can clearly be felt in “Telephone Operator,” which sounds like cross between Chuck Berry’s “Memphis” and The Beatles’ “Please Please Me.” The Leftovers just wrapped a tour of Europe, where they seem to have a much larger following than in the U.S. ”We do better in Europe than in the US,” says Woronoff. “We were in Spain last week and the shows were huge. We’re really not used to drawing big crowds, and it was a thrill to have so many people there for us. The fans there are all really excited about music, especially power-pop and pop punk, so naturally Europe is a great place for us. Of course that’s not to say we don’t love everyone we’ve played for in the U.S.—it’s just taken longer for them to catch on.” (Ernest Barteldes)