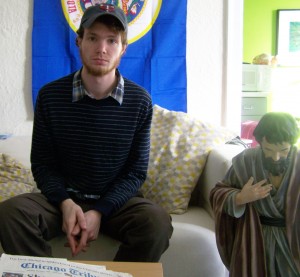 While Joshua Pederson, the singer/songwriter and leader of Where Astronauts Go To Hide, was eating at a space-themed pizza restaurant in Minneapolis, where the delivery drivers wear “spandex space suits” and “drive around in electric pods that are about two-feet tall,” he was inspired for the name of his current project. The music isn’t galactic sounding by any means and actually Pederson says that it’s just a name that came to him and doesn’t have any other real meaning.

Pederson and his somewhat constantly evolving cast of supporting players, made up of friends from his original hometown of Minneapolis, his current home, Chicago, and many other cities in between, have a “fun-loving, folk-rock” sound, as described by Pederson himself. The project began after he had spent time as a part of a louder punk band and decided to branch out on his own. Where Astronauts Go To Hide was initially a darker brand of folk music, but after the addition of Rachel Lindsay Kahn’s violin, the project began to take on a different tone. The violin adds brightness and movement to many of the songs and takes any potential dreariness out of them.

Starting off, many of Pederson’s lyrics had a central theme of life in the Midwest, but that began to change as well. The band began touring and Pederson began to see more of the country and to meet the people in it. “I never traveled much before I moved [to Chicago],” says Pederson, “and it morphed from this totally Midwest- based project to something different.” Many of his lyrics, at that point, began to have central themes of travel and of the experiences that go along with meeting new people.

Since its inception, Where Astronauts Go To Hide has toured “intensively,” according to Pederson. He explains that there are certain cities, such as Omaha and Denver, that the band has been concentrating on and trying to build followings through old and new friends in those places. He adds that, in order to hit those key cities, the band will “do shorter jaunts of nine or ten days, but it will be all the way from Chicago to New York to Denver. They’re ridiculous itineraries, but they tend to work out.”

Pederson and the group are currently recording new material for a full-length record, “Little By Little,” which is tentatively scheduled to be out in the spring as well as planning tours for January and March. (Todd Miller)