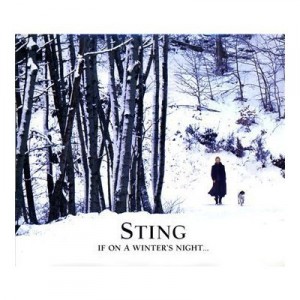 Sting, “If On a Winter’s Night” (Deutshe Grammaphon)

Every now and then, a recording artist comes along and completely redefines what a Christmas album is in surprising and delightful ways. Sting’s Christmas album is not only his best new album in a long, long while, but a Christmas record that is good enough to put on any time of the year. The carols chosen tend to be somber, introspective and refreshingly under-produced, usually with Sting’s own voice and simple acoustic accompaniment. Sting claims he is an agnostic, but you would never know from his poignant performances of such traditional holiday fare as “Gabriel’s Message” and the “Cherry Tree Carol.” But the album also features other winter-themed offerings that celebrate the stark beauty of barrenness of the season, such as songs by British baroque composer Henry Purcell about cold and ice, the heartbreaking finale of Schubert’s song cycle of winter and lost love “Winterreise,” Celtic folksongs that include a Halloween offering, and even originals such as Sting’s own setting of Robert Louis’ Stevenson’s “Christmas at Sea” and his own wintry lyrics to the melody of a Bach Cello Suite.

This is Aretha’s first-ever Christmas album, believe it or not (2006’s “Joy to the World” was a record-company compilation of carols and sacred songs from throughout her career), and given the great care that was obviously taken with it, you can tell this is something that has been in the back of her mind for a long, long time. The virtuosity here is stunning and will certainly not be to everyone’s taste, as Aretha tends to take simple familiar songs and vocalize on many of them with “too many notes,” as the emperor told Mozart. But it’s the feeling underlying the notes that makes the grandest impression and the fact that there is so much heart here. There are carols, gospel songs, originals and spoken sections where Aretha offers up family vignettes and hopes.

There is no reference whatsoever on this expanded re-release to Michael Jackson’s death, and it looks to have been in preparation since well before that tragic and unexpected event. The first half of the album is essentially a re-mastered re-release of 1970’s “The Jackson 5 Christmas Album,” including the group’s familiar takes on classic Christmas songs. But it’s the rest of the material here that is so fascinating, including Michael’s “Little Christmas Tree,” and stripped-down alternative versions of other tracks, including a group a cappella version of “Give Love on Christmas Day.” There are also spoken radio Christmas greetings from the group members, although it is a bit eerie to hear the pre-pubescent Michael wising you a Merry Christmas and to hear him sing about seeing Mommy kissing Santa Claus and how he is going to tell Daddy, only to realize he might have been better off if he had.

The distribution on this release has been spotty, so it may be hard to find: Target stores are offering it as a promotional item and websites are featuring it. Since there are not that many great jazz Christmas releases out there, it is worth seeking out as Wynton and his ten-piece band offer Christmas instrumentals—occasionally with vocals (thankfully not by Wynton)—that by and large give you a joyous, New Orleans dixieland sense of the holiday season.

A friend once described tenor Andrea Bocelli’s voice  as “Pavarotti without balls” and that aptly describes his sound: sweet, lyrical but devoid of emotion or masculinity. Take such a sound, turn it over to pop producer and arranger David Foster and a gaggle of guest stars that include Natalie Cole, Mary J. Bulge, Reba McIntire, the Muppets and even the Mormon Tabernacle Choir and you get a rather bizarre holiday offering that is often so misconceived that it becomes entertaining.

In a class so all of its own that it is literally blowing in the wind somewhere apart from our  Top 5 list is Bob Dylan’s Christmas offering.  One of the twentieth century’s most revered poets who made a career by twanging that poetry to his own guitar playing, Dylan has never been able to sing even remotely on pitch, a malady all the more exaggerated when he is placed within vintage 1960s-style arrangements that are the antithesis of everything that Dylan stood for at the time. The result is a Christmas album so bad that it’s actually good, a masterpiece of bad taste that has Bob aimlessly bellowing his way through your favorite carols in a manner so off and quirky in every respect that it will make you proud of your family’s worst-ever drunken Christmas sing-along.