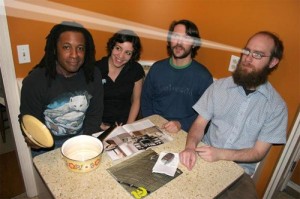 The Good Life—named after Nebraska’s original state slogan—was originally meant to be a solo project for Omaha native Tim Kasher, a way for him to release the songs that were too mellow for Cursive, the other group he fronts. However, after 2000’s “Novena on a Nocturn” it quickly expanded into a full-fledged band now made up of Roger Lewis, Ryan Fox (The ‘89 Cubs, Art in Manila) and Stefanie Drootin (if you’ve seen any Saddle Creek-related band or She & Him live, you’ve seen Drootin on bass at some point). These indie-rockers’ subsequent releases—2002’s “Black Out” and 2004’s “Lovers Need Lawyers” EP and “Album of the Year”—are fantastic and each new release demonstrates how Kasher has grown as a lyricist, from Mr. Mope to Mr. Storyteller. The band’s most recent album, 2007’s “Help Wanted Nights,” wasn’t bad, just disappointing and never clicked with me. But four out of five aint’t bad. Nevertheless, I’ve always enjoyed the band live and may or may not have shed some tears during “O’Rourke’s, 1:20 A.M.” (It’s because I was thinking about a friend of mine who you don’t know who was dying, that’s right, dying.) One of my favorite concert moments happened at TGL’s May 2005 gig at the old Bottom Lounge. Former member and Chicago-resident Jiha Lee hopped on stage and they launched into the beautiful, nearly ten-minute “Inmates.” It began with soft acoustic guitar and percussion as Lee recounted a failed relationship and climaxed with electric guitars and Lee and Kasher belting out “I won’t be your prisoner, oh no” repeatedly. I’ve seen Lee countless times over the years at her friends’ shows and knowing there’s a chance she’ll join in again for “Inmates” alone would make this evening well worth the twelve bucks. (Kelley Hecker)