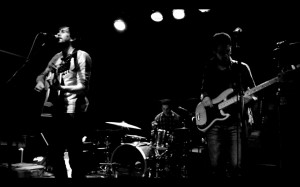 Estwing is the singer/songwriter and founder of local folk outfit Louis and The Hunt. When Estwing began writing and recording songs a year ago, he was by himself, but he always knew that he eventually wanted to form a band for those songs. He also knew that he didn’t want that band to be called The Ryne Estwing Band or anything like that, so he created Louis and The Hunt, and this has allowed Estwing the freedom to write fictionally and autobiographically, solo and with the band, all under the same umbrella. He’s happy with the choice, even though the name does often lead to questions like, “Which one of you is Louis?”

Formerly a player in other singer/songwriters’ bands, Estwing is new to the role of being the one who primarily writes the songs. “In those bands, I was mostly playing bass and I think I was starving for an outlet to write my own songs and especially work on the guitar because I studied classical guitar in college,” Estwing says. “I had been getting stored up and I wanted to use it in some way.”

Although there hasn’t been a proper release yet from Louis and The Hunt, the group has released ten songs on its MySpace page, certainly enough for listeners to get a good idea of what is to come on the debut EP, is tentatively slated to be released sometime in late winter or early spring. The songs are delicate, with a focus on acoustic guitar and percussion. Estwing’s falsetto vocals are the centerpiece of the songs, providing movement and melody through the space that has been left between the often-minimal instrumentation.

Estwing hopes to be able to continue to do most of the recording on his own, at home. “That’s kind of all that I’ve done is recorded with [previous] bands in studios, and they’ve just been done with all of their parts in two days and there’s no time to do post-production or pre-production for those songs. The really cool thing about [home recording] is that I can work on a song for a couple of weeks and really develop it, add things in and take things out. I always felt like we didn’t get to do that at any of the studios we went to.” (Todd Miller)