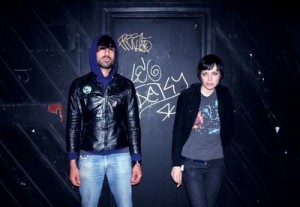 In 2008, Toronto electro-punk duo Crystal Castles released their highly anticipated self-titled debut LP. Many of the tracks had been floating around for years, either in demo form or on sold-out seven-inches, but this official release pushed them into the spotlight. Unfortunately, it also meant anything Ethan Kath and Alice Glass did was made public, which didn’t exactly paint them in the best light, from the feud with artist Trevor Brown to the last-minute cancelation at Dallas’ Granada Theater this year, which led staff to call the duo “pre-madonnas,” to kicking supporting band VEGA off their tour in April, accusing them of theft, to Glass trashing the stage and throwing a punch at security at Barcelona’s Sonar Festival because the sound sucked. Point is: they’re a pretty polarizing pair. You either put their shit aside and enjoy the music or think they’re talentless pricks. I fall into the former category and “Crystal Castles” was one of my favorite albums of 2008. I saw the band live in 2007 and found it to be an intense experience. Though Kath is the brains behind the band, 21-year-old vocalist Glass is the entertainer, completely unpredictable and seemingly batshit crazy. Whether writhing on the floor, diving into the crowd, climbing whatever she can or playing with strobe lights, you can’t take your eyes off her. This’ll definitely be an interesting, albeit slightly creepy, show. Just don’t go if you’re prone to seizures. (Kelley Hecker)