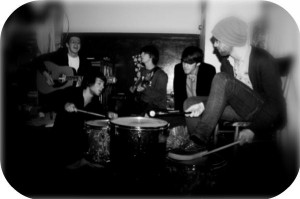 The instrumental duties of the members of Young Sun aren’t very specific or concrete, but that’s the way they like it. The group’s roster on its MySpace page lists five drummers, three of whom also play bass. Three of the five also play guitar and all five are cited as sharing vocal responsibilities. “We love variety and changing things,” says Ryan Smith—vocalist, guitarist, bassist and drummer. “At any given moment, I could be singing and playing a bass and someone else could be playing a tom alongside our drummer. We’re constantly moving instruments from person to person.”

There are a few reasons for all of the sharing and switching. Smith believes that as well as it being visually interesting for an audience that is watching them in a live setting, it strengthens the band’s songwriting. “None of us plays a single instrument the same as the other one, so when we’re writing, it can be as simple as saying, ‘Why don’t you play bass instead of him playing bass?’ and we’ll see how that turns out.”

All of the members of the band are also songwriters, bringing songs or ideas to the group to be flushed out. “You may like something, especially when you’re working on your own,” says Smith, “but when you take it [to the group], everyone is bouncing ideas off of each other and it seems to be a lot more fluent and layered.”

Young Sun’s few songs on its MySpace page are diverse, some more minimal than others, most centered around acoustic guitar, various percussion and a lot of vocal harmonies. There are traces, heavier at times (“Interrogation”) and lighter at others (“Salty Company”), of bands like Fleet Foxes and Grizzly Bear, two bands that Smith cites as influences for himself and the rest of the band. These two bands certainly weren’t the first to implement vocal harmonies heavily into their pop songs, but they are currently some of the biggest and most influential.

Young Sun is currently writing and recording for a full-length release. At shows, the band puts mixes of songs, old and new, on CDs that come complete with handmade packaging. “[The songs] change every time. We change up the songs and add new songs. It’s an evolution of what will probably be a full album, like trial and error.” (Todd Miller)