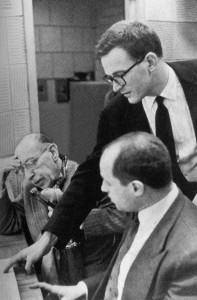 After turning to conducting, initially as an avocation, composer Pierre Boulez was chosen by legendary conductor George Szell in the mid-1960s to become the Cleveland Orchestra’s principal guest conductor so that Szell’s audiences would be able to hear large doses of twentieth-century music that Szell himself felt were beyond his grasp as a conductor to present convincingly.  Boulez’ Cleveland recording of Stravinsky’s “The Rite of Spring” from that time revealed the piece with a clarity and power that forever changed the way the public thought about the work.

“That work is extremely important to me,” says Boulez, “but it was rarely performed even in my student days. One performance I heard then with Charles Munch, the sacrificial dance that closes the second part, was as if both the players and conductor were driving on ice; neither were convinced.”

Boulez, for his part, says that he saw the significance of “Sacre,” as he calls it from its original French title, from the moment he saw the score, and that the transparency that became the trademark of his performances was immediately apparent and he admits that his approach to conducting the piece has been the same since he first conducted it nearly half a century ago.

“My approach to ‘Sacre,’ ‘Firebird’ [which Boulez himself will conduct here next week] and ‘Les Noces,’ the Russian Three, if you will, have been more or less the same for me, but there are scores that I approach very differently now. They say that you are an idiot if you change your mind, but I must be, because I have. I do [Alban] Berg differently now that I have conducted Mahler, because they are both from a similar sound world.  I would very much like to do [Schoenberg’s] “Gurrelieder” again: I haven’t done it in thirty years, and we were going to do it here, but it became too expensive and it was cancelled. I do not shed tears about these things, but it is a regret.”  Perhaps a ninetieth birthday present for Boulez from the CSO?  “Yes, perhaps!”