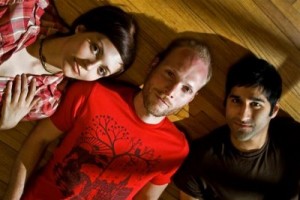 When singer/songwriter Nils Edenloff moved from Edmonton, Alberta to Toronto in 2003, he dealt with his homesickness by writing songs about his beloved former home. He eventually played them at an open-mic night in 2005, which led to a job hosting the open-mic nights (paid in beer and pasta), where he met drummer Paul Banwatt. The two began working together as The Rural Alberta Advantage, and later that year was joined by multiinstrumentalist Amy Cole. The trio played often around Toronto and slowly built a following as they began to work on their debut LP, 2008’s self-released “Hometowns.” The RAA was known for quite some time as “the best unsigned band in Canada” before Saddle Creek signed them and re-released “Hometowns” last summer, finding them an expanding fanbase. “Hometowns” only came out in 2008, but it’s already one of my favorite albums—every track is fantastic, from the acoustic thumping of “Rush Apart” to the sweet, low-key ballad “In the Summertime” and the kickass indie-pop rock of everything else. Live, The RAA is incredible: Cole dances her ass off as she bops across the stage singing and banging drum sticks, Edenloff tells countless entertaining stories, and the end—well, the end is special, and I won’t ruin it for anyone who hasn’t seen the band perform. (Kelley Hecker)