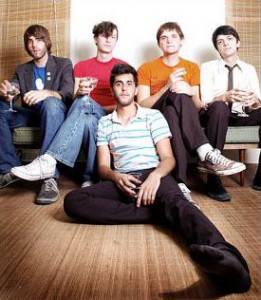 Voxtrot started as a solo project for frontman Ramesh Srivastava in 2002 and quickly evolved into a quintet. What hasn’t come quickly for this Austin indie-pop band is albums. Its first two EPs—2005’s “Raised By Wolves” and 2006’s “Mothers, Sisters, Daughters & Wives”—were nothing new or spectacular, just satisfying, catchy jangle-pop. I caught them on tour the summer after “Mothers” was released, and their live show was the same. These are guys who clearly love what they do, are sweet, enthusiastic and sound good, yet when I left all I remembered was “Holy shit, that singer totally looks like my cousin.” I was hoping its 2007 self-titled debut LP would bring that wow factor. It didn’t. Last year, Voxtrot shook things up with “Trepanation Party,” a single that bid farewell to the jangle and welcomed the synth, followed by seven-inch “Berlin, Without Return.” Unfortunately Voxtrot and synths don’t mix, and these two songs, which together are ten minutes, felt twice that length. Voxtrot’s been pretty quiet since July, so assume the band will be showcasing a lot of new material. (Kelley Hecker)