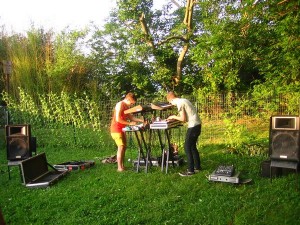 There has been a steady ongoing wave of electro-noise floating through the independent musical seas for a while now. The dynamic duo cleverly titled Truman Peyote brings a crisp and carefree attitude to what is often clogged with pretentious high concept, well, noise.

Hailing from the Boston neighborhood of Jamaica Plains, Caleb Johannes and Eric Farber pump out elongated sound-filled structures, using samples, field recordings and anything they can gets their hands on, making noise reminiscent of Animal Collective, The Rapture and Matt & Kim. Along with their LP “Light-Lightning,” the twosome has a twelve-inch split with fellow Whitehaus Family band Many Mansions and a split seven-inch with Turtle Ambulance on Breakfast of Champs due out this month, featuring the track “New Life, New Wife.” The song’s already received much love from Pitchfork.

Farber and Johannes discuss their music, their busy schedules and the town that influenced their sound.

Describe Jamaica Plains and the influence it has on your music.

JOHANNES: Jamaica Plains is a wonderful neighborhood of Boston full of life and art. The influence comes from a lot of friends making great music who live in close proximity. We’re always bouncing ideas off each other and collaborating, which strengthens the community and livens up the music.

FARBER: The biggest influence JP has on our music is the amount of creative activity going on in the area. Between the Whitehaus Family and everyone else producing things in the area, you feel obligated to keep up.

How did Truman Peyote begin?

JOHANNES: We formed the band in the summer of 2007 with the sole intention of creating weird sounds with (then new) electronic equipment. The end result was loose, dense, and very noisy. As the years went on we became more comfortable with our gear and our sound so we began to write/compose pieces (often heavily loop-based), and after that full songs came out which is kind of where we are now.

FARBER: During our last year of high school Caleb, Jeffrey (who is now New Yoga) and I would record noise jams in my basement every day after school. We used whatever concoction of noisemakers we could get our hands on and smoke cigarettes at my elementary school across the street so my mom wouldn’t see.

How do you decide on what samples go with what music?

JOHANNES: Almost all of our samples are field recordings that we ourselves collect. Usually the samples are relevant to the theme of the song. For example, in “Marinated,” off of the “Light-Lightning” record, Eric recorded me marinating raw chicken breasts with BBQ sauce.

How has the response been on this tour?

JOHANNES: The response has been great! Our Brooklyn shows were especially sweet, but every show has been super rad, and we’ve been playing with a lot of great bands.

The tracks “Kart Wheels” and “Numjob” feel more like full compositions rather than songs, flowing in this chronological form. How is the writing process for these different then for other songs like “New Wife, New Life”?

JOHANNES: I think the process is constantly changing for us because with every new jam we learn more about recording, sampling, playing various instruments, etc. “Light-Lightning” was kind of our transition into a more song-based feel for our music, but after that record the new songs became much more full compositions because we were able to do more. The challenges of recording “Light-Lightning” were already overcome so we had all this room to experiment with newer sounds and recording techniques. (Jonathan Kaplan)