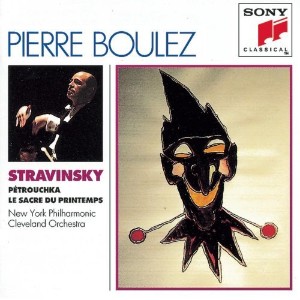 Pierre Boulez is widely represented on recordings and videos both as a composer and as a conductor. Sony Classical has re-released virtually all of his earliest recordings in a special “Pierre Boulez Edition” released for his eighty-fifth birthday, but many of these recordings have long been supplanted. Deutsche Grammaphon is re-releasing many of its Boulez recordings in multi-disc sets this year and the CSO is even releasing an all-new “Boulez Conducts Stravinsky” disc later this month on its own CSO Resound label. The following very select list is a basic introduction to the remarkable art of Pierre Boulez:

Bartók: Piano Concertos Nos. 1 and 3. Daniel Barenboim, soloist, Pierre Boulez and the BBC Symphony. Angel/EMI Classics. Many people thought the Bartók Piano concertos were just noise until this legendary 1970 recording forever made these works part of the standard repertory. 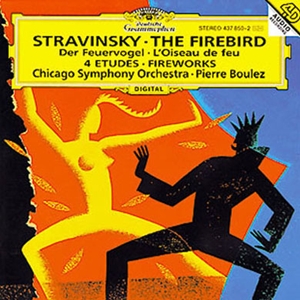 Boulez: Second Piano Sonata. Maurizio Pollini. Deutsche Grammaphon. Although this virtousic tour de force is one of the most studied and talked-about piano works in all of twentieth-century music, few pianists have the technique and musicianship to carve music out of this seemingly chaotic piece. Pollini does it with ease, and includes other classic twentieth-century masterpieces by Webern, Prokofiev and Stravinsky as well.

Boulez: “Le marteau sans maître.” [“The Hammer without a Master”]  Pierre Boulez, L’Ensemble InterContemporain. Sony Classical. One of Boulez’s most popular works, “marteau” is the piece that first marked him as a major composer of the highest ranking. Even today with its haunting timbres and the surrealist imagery of Rene Char, “marteau” sounds as fresh as ever. Although Boulez recorded the work in the 1970s with the BBC Symphony, this later 1985 live recording with his own ensemble is a more relaxed look at the work (it is also included on the newly released “Boulez Conducts Boulez” Pierre Boulez Edition).  This recording also includes Boulez’s “Notations” for piano and his groundbreaking “Structures II.”

Boulez in Rehearsal. Image. This extraordinary 2002 DVD is a full rehearsal and dissection of Alban Berg’s “Three Pieces for Orchestra” and Boulez’s own “Notations I-IV” with the Vienna Philharmonic.

Boulez: “Pli selon pli.” [“Fold upon Fold”] Pierre Boulez, Phyllis Bryn-Julson, BBC Symphony Orchestra. Erato. Boulez’s largest piece to date, this song-cycle for soprano and orchestra explores the poetry of Mallarme.  Here again, there is an earlier recording of the work Boulez made in the 1970s with the same orchestra but this later recording is preferable both in sound and interpretation.

Bruckner: Symphony No. 8.  Deutshce Grammaphon. Pierre Boulez, Vienna Philharmonic. Deutsche Grammaphon. Boulez has always seen the value of Mahler, but came rather late to Bruckner. This collaboration with the Vienna Philharmonic is an entirely new take on this expansive music. A live video performance is also available on DVD.

Mahler: Symphonies.  Pierre Boulez. Deutsche Grammaphon. Boulez began his complete Mahler cycle in Chicago, and those entries—the earliest and latest of the works, the First and Ninth Symphonies—are among the best in this series which also include entries with the Cleveland Orchestra and live recordings with the Vienna Philharmonic.

Schoenberg: “Pelleas und Melisande,” Variations for Orchestra, Op. 31. Pierre Boulez, Chicago Symphony Orchestra. Erato. The pre-twelve-tone “Pelleas” was so enthusiastically received when Boulez first did it with the CSO in 1987 that it was scheduled for his return trip in 1991 as his first CSO recording, along with the Variations which show the organic progression from the late Romantic chromatic world of “Pelleas” to the thoroughly serial “Variations.”

Stravinsky: “The Rite of Spring,” “Petrouchka.” Pierre Boulez, Cleveland Orchestra, New York Philharmonic. Sony Classical. The Cleveland recording of “The Rite of Spring” is the album that told the world an important new conductor had arrived on the scene in the 1960s. The recording remains the clearest, most transparent version of the work on record. A later London Symphony performance that was captured for DVD also includes Boulez discussing the work.

Stravinsky: “The Firebird,” “Fireworks,” Four Etudes. Pierre Boulez, Chicago Symphony Orchestra. Deutsche Grammaphon. One of the best of the Boulez/CSO collaborations, this complete “Firebird” is also the best-sounding version out on disc. Boulez and the CSO also appear in a DVD version of this, filmed at a live concert in Cologne, Germany, in 2000. 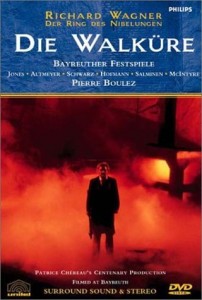 Complete Webern, six-disc set, Deutsche Grammaphon. Boulez has recorded the complete works of Anton Webern twice, but the first set—half the length of this set—only included works with opus numbers and this later digital set from 2000 has better sound as well.

Boulez Conducts Zappa: “The Perfect Stranger” and other works. Pierre Boulez, L’Ensemble InterContemporain. Angel/EMI Classics. Believe it or not, rock star Frank Zappa was actually a disciple of Boulez and much of his avant-garde experimentation with The Mothers of Invention were directly inspired by early works of Boulez. Here Zappa tries his hand at serious music, with Boulez on hand to conduct three Zappa works for orchestra.

[…] Click here for a breakdown on Boulez’ essential recordings. […]