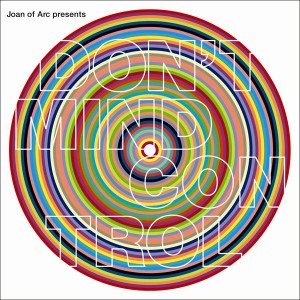 For what seems like an eternity, Tim Kinsella has been a figure in Chicago’s art scene, mostly through his musical work with Cap’n Jazz, Joan of Arc, Owls and Make Believe, plus work he’s presented under his own name. While an innovator, Kinsella’s a bit of an acquired taste—his apparent aversion to conventional melody and his unique and often abrasive voice could turn a traditional rock fan off. That said, Kinsella’s a lyrical master, his projects each thrillingly distinctive and daringly experimental, and it’s obviously no stretch to call him an icon in certain circles.

Joan of Arc, Kinsella’s longest-running project, has famously consisted of a rotating cast of musicians through the years and its twelve releases. 1997’s “A Portable Model Of…” and 1998’s “How Memory Works” remained my favorite Joan of Arc records for a decade, until “Boo Human” was released in 2008 and annihilated me. Kinsella’s newest Joan of Arc project is called “Don’t Mind Control,” and it’s a compilation of brand new songs submitted by past and current Joan of Arc members, eighteen tracks in all. Contributors include Tim’s brother Mike Kinsella’s Owen, A Tundra, Disappears, Jeremy Boyle, Cale Parks, Euphone, Tim Rutili, Josh Abrams, Ghosts and Vodka and Kinsella himself. In many ways this is the quintessential Joan of Arc release, as over the years the band has thrived with planets of talented musicians orbiting around Kinsella’s sun.

The Joan of Arc Don’t Mind Control Variety Show is Kinsella and crew’s live presentation of the collection of work, and it hits the stage at Empty Bottle January 22. I caught up with Kinsella over email to discuss the new project.

What do you aim to accomplish with “Don’t Mind Control”?

Mostly I just like my friends’ bands a lot. I feel very grateful to all of them for putting things together with me in the past and as a bit of a tech-grandpa with little grip on all of those kids these days’ newfangled devices I wasn’t about to put a playlist on my blog.

What I like most about it is that this compilation is a retrospective of individual musicians, not just one band. But do you think the collection represents what Joan of Arc “is,” so to speak, in any way?

Thanks. I think it is my favorite record that has ever existed, whereas I’m often not too sure about “Joan of Arc” records. But there’s definitely a good number of the same biases represented. I think it certainly in a practical and clinical sense must be a sort of swirling constellation of many of the different elements that have had a hand in Joan of Arc records, each distilled.

When you look back and consider the long list of people you’ve collaborated with in the past, do you become all nostalgic about it? Do you consider this comp a reunion of sorts?

No. I hate that nostalgia shit. That’s just a sort of bittersweet romantic-comedy sentiment used to sell cars and trick adults into thinking the culture-wide endemic of suspended adolescence is somehow natural and not just a ploy of capitalism to expand its target demographics. I’m not too drawn to the sort of constant cyber-high-school reunion and video-game aspects expected of today’s thirty-something. We will however all sing “Lean on Me” together at the end of the variety show.

How do you feel Joan of Arc has benefited over the years from having a long list of contributors?

Oh anything is possible, expanded sonic palette, there’s always someone around with a better idea than me.

Do you think having that revolving door has hurt the band in any way?

Well the “band” couldn’t exist in any other way. So as a band-band it’s clearly a failure. And very few, if any, of the people involved feel any accountability to it in any way beyond the occasional jovial camaraderie of getting together to put together these weird puzzles. For me it’s a means to keep making records and playing in new ways, but it was not conceptualized then realized. It’s just a way of being because no other way of being with more structural integrity seemed sustainable. It’s maybe not as weird in practice as talking about it makes it seem.

What’s planned for the show? Will it really be presented in a classic variety-show style?

Yeah, fifteen-minute sets from all the participants. I know some people are doing some weird things they don’t usually do, some covers, some telling of jokes, some different approaches to the fifteen-minute thing. There’s an MC, a blast of theme music, between acts, a DJ for between the set changes. No clowns or balloon drop, but ooh, Intelligentsia’s Joan of Arc blend!