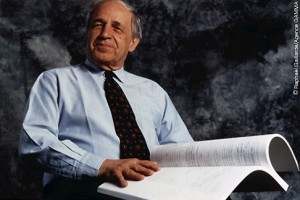 If you were going to catch only one concert of the month-long Boulez@85 celebration that would tell you the most about the man who is being celebrated, this is the one to catch. We know Boulez is a great conductor, but hearing his own music in Chicago is still somewhat of a rarity compared to how much music we hear Boulez conduct of others. This is the only concert primarily devoted to works composed by Boulez himself.

Opening the program will be French pianist Pierre-Laurent Aimard performing “Notations,” an early adventurous piano work consisting of several movements which Boulez is in the process of re-imaging for orchestra. Aimard will be joined by his protégé Tamara Stefanovich for “Structures I” for two pianos, the first major piece that Boulez wrote that applied the serial principles of Schoenberg, Berg and Webern to all aspects of its composition: form, rhythm, register, dynamics, et al.

“Messagesquisse” for solo and six accompanying cellos was originally written for legendary Russian cellist and conductor Mstislav Rostropovich, but as Boulez explains, “it was not ready on time so we missed being able to perform it together. He only did it once, and I was not there, but he wasn’t practicing much in his later years.” Chicago Symphony principal cellist John Sharp will take the lead with his colleagues from the CSO cello section.

Boulez has written a handful of major works incorporating the cutting-edge electronic music technology that had developed the Paris-based IRCAM—The Institute for Research of Coordination between Acoustics and Music—an institution which he founded and directed for fifteen years and with which he is still passionately involved. “Anthèmes 2” for solo violin and electronics features CSO violinist Nathan Cole as soloist and includes live sound design by IRCAM technicians and engineers where entire ripples of sound made up of digital transformations of conventional instrumental timbres made in real time engulf the listener from every direction.