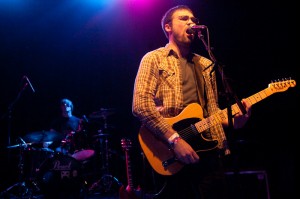 What’s in a name, really? Too many commercial bands have made it with obscure names based off cartoons, books or movies. So what can you make of a band whose name is Jet W. Lee? It sounds like a mode of travel for Civil War generals.

The band’s sound? Nineties alternative rock like Superchunk or Local H mixed with a bit of eighties punk a la Minutemen. “We can’t stand only liking a certain type of music, although I would say we are solidly classified as loud alt rock,” says guitarist and vocalist Jesse Johnson.

Jet W. Lee calls Champaign/Urbana its home, but adds Chicago as its home away from home. The band began as a two-piece—with Johnson pulling guitar duty and Patrick Mangan behind the drum kit—and formed after a few drinks at a local bar. ” I was actually gonna ask him to play drums with me, but before I could ask he told me that we should start a band,” Johnson says.

Oddly, Mangan has a bit of a commute to fulfill his role in the band. “Pat has been commuting back and forth between Park Ridge and Champaign/Urbana for the past few years,” Johnson says.

Almost immediately the two began to record their ideas in the most stripped-down means available. “We did everything as live as possible and just tried to let things happen,” Johnson says. The recording turned into album “Who Shall Remain Shameless,” all materialized over the fall of last year. “Overall we recorded the album in six nights, just spread out over three months,” Johnson says. Yet the album has a feel that seems polished beyond such a short stint in the studio.

All their time living in Champaign has worked to their advantage, as they’ve since found a bassist in the town’s Pierre Achille. “People here know who we are from other bands and they’ve made it seem like we weren’t always starting from scratch,” Johnson says. “That’s a very cool thing.” (John Wawrzaszek)