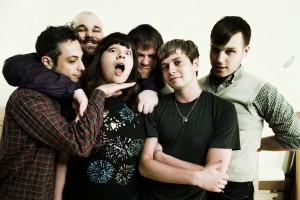 I’ll come out and say it: Toronto’s Fucked Up is the best live act in North America. The thunderous post-hardcore mayhem—led by charismatic and maniacal lead singer Pink Eyes—chews up any audience lucky enough to be in attendance, sometimes literally. (At the Pitchfork Music Festival, beach balls batted towards Pink Eyes were promptly torn to shreds…by his teeth.) The band’s 2008 record “The Chemistry of Common Life” remains in heavy rotation at home and at my work desk, a massive attack of charging guitars and venomous screams. On a stage—or in the crowd, as Pink Eyes often ends up—Fucked Up sounds like a perfect storm in hell. In a strange bill, Philadelphia rock ‘n’ roll man Kurt Vile opens, whose music is more like Bob Seger and Bruce Springsteen. He signed to indie-rock gold standard Matador last year; “Childish Prodigy,” his latest album, is an alluring, sometimes experimental record that shows Vile’s notable talent as a songwriter. One gets the feeling that Vile’s only getting warmed up and that the best from him is yet to come. Note: Tonight Fucked Up and Kurt Vile play two shows, an “early” one at the Viaduct Theater and a “late” set immediately afterwards. (Tom Lynch)