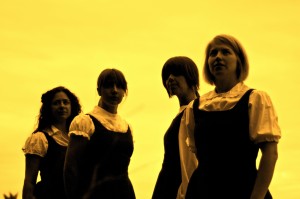 Local chamber pop group Singing in the Abbey successfully pours minimalist classical piano through an alt-pop filter. The result, moody and at times even gothic, is a soundtrack to shadows in an old castle—Annie Higgins’ deep vocals and piano playing are surrounded by a string section and scattered percussion as the melodies dip and weave. The release of the band’s debut record, “Wake Up, Sardis!” is celebrated this Thursday at Subterranean, a room that, especially with its balcony, seems fit for this sort of haunting. “Thom Yorke and Julie Andrews’ bastard child,” the band describes itself, and if that’s not enough to get your interest piqued I don’t know what is.

“My intention was not to form a band, it mainly was to get these songs layered with strings,” Higgins says of the record, which is nearly four years in the making. “From the beginning the vision was, I guess, I started out wanting to layer the paino with the strings, but as I spend time with the girls, it became about what their individual strengths were. Arrangements-wise, it became less of them trying to support the piano and more [towards] the strings having their own individual identity. Musically, you want to work with that—highlight what they’re doing, instead of focusing them as a support of what you’re doing.”

Higgins, who trained in music at the University of Montana, straddles a fine line between classical compositions and pop. “I actually try to not think about it in that context,” she says. “When songwriting or arranging, I’m driven by the song itself. I’m not thinking about genres. I listen to a lot more classical—I’m always striving more towards that sort of musicianship or writing, but I have a pop sensibility that I have naturally, and that’s the channel it comes through.”

The material on “Wake Up, Sardis!” according to Higgins focuses heavily on nostalgia, or, more broadly, the past itself. “A lot of material on ‘Wake Up, Sardis!’ deals with memories from childhood,” she says. “I think…that’s something that comes out naturally. Things from the past are the material—the lyrics—and a story is being told.”

On another side of Chicago’s padded room of pop music lie The Dirty Rooks, a no-holds-barred, unapologetic booze-rock ensemble that sometimes has up to thirteen members on stage at one time. The band celebrates the release of its second album, “Sugar Mama,” on Sunday at Lincoln Hall, and the group has a reputation for putting on an enthusiastic, blood-alcohol-raising live show that’s all blues, soul and classic rock ‘n’ roll. (Horns, piano, organ, gospel back-up vocals, you name it.) “Sugar Mama,” as could be ascertained by its title, isn’t exactly a subtle record, but it’s damn fun and will surely make you go for, oh, just one more drink, then home, I swear.

“We really wanted to do a better job of capturing the live-show sound,” says singer Grant Gholson of the band’s approach to the new record. The songs themselves have been bouncing around a bit as well. “Some of these songs have been around for a few years,” Gholson says, “after the first album in 2007, right off the bat, we started writing new songs. I think we’ve actually been playing these on stage for a few years, so before we went in to record, we had tuned in to their nuances. We knew what we had to do, as opposed to getting into the studio and being not sure what we want to do. We were a little more organized in that sense.”

The Dirty Rooks have maintained a party-band reputation since they dropped their first record in 2007, and often it’s difficult to overcome the stigma of being a good-time, not-so-serious barroom house band. “I agree with you,” Gholson says, “I think it’s easy to stigmatize a band who [has] a kind of fun-time, party, drink beer [sort of performance.] Yeah, that’s cool, but also we want people to like our music on a deeper level. We probably…I think that what we are consciously trying to avoid is a navel-gazing attitude, too introspective, too minimalist. But I think there’s nothing wrong with people liking a band because they want to have a good time and feel good.”

Or, as Gholson sums up succinctly, “There’s nothing wrong with putting on a record and getting drunk and having a good time.”