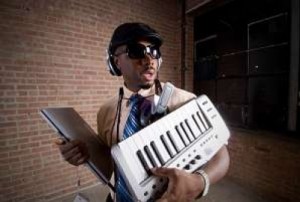 For the last year and a half, Freakeasy has been lighting up Chicago’s underground scene with its distinctive brand of partying centered around positive vibes, community and live art and installations. Part of what makes their events so successful is the partnering of like-minded organizers including the illmeasures crew, best known for house, techno and downtempo, and DJ/producer Radiohiro, whose ethno-centric breakbeat and dubstep sounds have been building a steady following for the last few years. With the two principals at complete opposite corners of the dance-floor sonic spectrum, Freakeasy boasts among the most diverse lineups, with techno, dubstep, house, breakbeats and the kitchen sink thrown together in a single evening. Tonight, the underground bubbles above ground with an event at Smart Bar, featuring regulars Radiohiro & MC Zulu (pictured), Brad Miner and Striz, with special guests DJ Form (formerly with the Baldwin Brothers) and San Francisco-based, Sri Lanka-born Asian Massive pioneer Janaka Selekta (with JC Stokes). But sadly, I don’t think the fire-dancing performances common at Freakeasy events will be permitted inside! (Duke Shin)