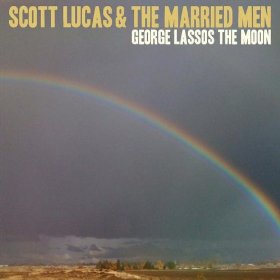 I guess I never really realized before, but as a fan of Local H, of “Ham-Fisted” all the way through to “Twelve Angry Months,” I’ve attached myself to Scott Lucas’ acoustic ballads as much as I have to his hard-driving alt-rock. “No Problem” has always been a favorite of mine from Local H’s breakthrough “As Good As Dead” record, as well as “O.K.”; and from “Pack Up the Cats,” minute-long transition track “Lead Pipe Cinch” was always a welcomed break from the heavy guitar pounding. Lucas has now “gone solo” with backing band The Married Men, and on his new record, “George Lassos the Moon,” he plants himself in a softer, mid-tempo soil, bouncing between acoustic-guitar-based odes and melancholic pop-rock. Lucas has always had a great rock-music voice, capable of torching his throat over Gibson power chords and tackling more subdued songs, and on this album, seemingly his most personal, he’s taking it easy. “Gone-solo” records are traditionally bogged-down with self-indulgence and over-introspection—with few exceptions—and while Lucas’ new project is indeed as introspective as he’s ever been as a songwriter, he finds a way to make it work by, essentially, laying it all on the line. (If a record’s title is a reference to “It’s a Wonderful Life,” chances are there will be hearts on sleeves.) And you know what? In the best songs, like “Crosshairs,” “I Put a Spell on You” and “Chin Up, Kid,” Lucas even sounds like a wise old man. (Tom Lynch)