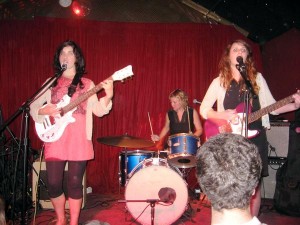 They are called The Sandwitches. They have an album, and it’s called “How to Make Ambient Sadcake.” Honestly, just on paper, it’s a struggle to determine if there’s anything not to like. The San Francisco three-piece combines DIY bedroom-sound with sixties girl-group pop. The songs are lo-fi but bursting with pop-songwriting talent—a bit like the Vivian Girls, actually, with less distortion and shoegaze haze. The vocal harmonies that The Sandwitches display are beautiful and strangely haunting—this is like a band that only exists in dreams or David Lynch films. The low quality of the production actually charms this time, as opposed to the growing trend of actually forcing your music to sound like shit, a la Wavves. The songs that feature organ, like “Beatle Screams,” will stay with you for days,” and the straight-up oldies-station-sounding “Back to the Sea” could’ve soundtracked Marty McFly’s first visit to 1955 Hill Valley, instead of “Mr. Sandman.” If The Sandwitches don’t do too much after this record—not saying they are incapable, or that they don’t already have epic plans for the future—”How to Make Ambient Sadcake” has cult record written all over it. (Tom Lynch)